Quiz Night @HighburyL So here are the answers to this week's quiz. How did you do? #QuizTeamUnderdogz #PubQuiz 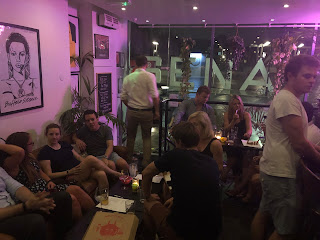 So here are the answers to this week's quiz. How did you do?

In the News
1. Which Oscar winning director quit his job at the helm of James Bond 25 over 'creative differences'? Danny Boyle
2. A fish shop in Kuwait was reportedly shutdown for goign what to make his fish look more fresh? Googley eyes
3. Sports Direct owner Mike Ashley agreed to buy which chain store for £90m? House of Fraser
4. I'm a celebrity get me out of hereeeee will be returning this autumn, which celeb will be temporarily replacing Ant as Dec's co host? Holly Willoughby
5. After her catsuit was banned in the French Open, Serena Williams has taken to wearing what as she makes her 1Oth consecutive US Open euarter Final? Tutu

World
1. Which musical string instrument became associated with Hawaii after it was introduced by Portuguese immigrants in the 19th Century? Ukulele
2. What is the name of central London's one remaining wholesale market where meat and poultry have been traded for over 800 years? Smithfield
3. In which part of the world would you find Saint Piran's Flag? Cornwall (black w/ white cross)
4. There are two landlocked countries in South America can you tell me what they are? Paraguay and Bolivia
5. The Welsh Premier League FootballTeam TNS are now known as The New Saints but what did the same abbreviation stand for between 1997 and 2006? Total Network Solutions (a sponsorship made famous by Jeff Stelling once announcing "They'll be dancing in the streets of Total Network Solutions tonight!" on Soccer Saturday)

Food and Drink
1. In restaurants, what French term lets the customer know that they choose dishes from the menu as opposed to a set-menu? A La Carte
2. Which alcohol spirit brand uses a Bat on its logo in dedication to the bats that lived in the originally distillery? Bacardi
3. Andrew has a 12" pizza to himself, Liz has half of an 18" pizza. Who ate more pizza? Liz (12" pizza is 113.1 square inches. 18" pizza is 254.5 square inches so half of this is 127.25 square inches)
4. What is the name of the food product, rich in B Vitamins, that is produced as a by-product of the beer brewing process? Marmite
5. The Globe Artichoke is a species of which flower which is characterized by its prickles? Thistle

Connections
1. Music city USA is the official nickname of which city in Tennessee? Nashville
2. In the United States, what is the name of the river that separates New Jersey from Manhattan? Hudson
3. What is the name of the 2007 film, nominated for 4 Oscars, which tells the story of an independent-minded teenager confronting an unplanned pregnancy? Juno
4. What was the destination of the NASA mission, Apoilo 11? Moon
5. In the British version of the board game Monopoly, what is the most expensive property a player can purciase? Mayfair

Science & Nature
1. What does 'http' stand for, as used in website addresses? Hyper Text Transfer Protocol
2. Who is credited with the discovery of Jupiter's 4 moons in the year 1610? Galileo
3. What does the Gieger counter measure? Radioactivity
4. The largest known spider in the world is named after which biblical character? Goliath
5. What is the official name of the north star? Polaris

The Arts and Culture
1. In the UK mockumentary The Office, Wrat is the name of the paper merchants David Brent manages? Wernham Hogg
2. In Stanley Kubrick's 1980 horror classic The Shining, what is the name of the hotel situated in the colorado Rockies, where the story unfolds? The Overlook Hotel
3. What was the name of Bart Simpson's 1990 single that went to number 1 in the UK Charts and featured back-up vocals from Michael Jackson? Do The Bartman
4. Which british sculptor has works such as the Arcelor Mittal Orbit and Cloud gate (big silver bean in Chicago) included in their portfolio? Anish Kapoor
5. What are the names of the twin characters in the Lewis Carroll novel Through The Looking Glass who have become synonymous in western popular culture slang for any two people who look and act in identical ways? Tweedledum and Tweedledee

Posted by overyourhead at Thursday, September 06, 2018