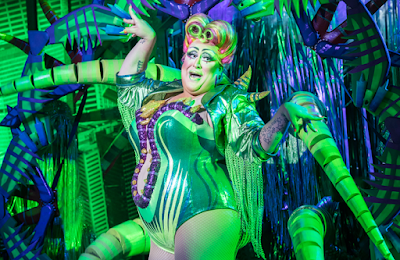 Alan Menken and Howard Ashman's fabulous 1982 musical, based on a low-budget 1960 movie of the same name, is a celebration of early Motown and rock and roll music, with a bizarre plot and plenty of black comedy. It is a well-loved show and possibly one of our favourite musicals so we were really hoping they wouldn't fuck it up. Luckily for us - they didn't!

From the moment the voice of the prologue stated those opening lines, "On the 23rd day of the month of September in an early year of a decade not too long before our own the human race suddenly encountered a deadly threat to its very existence. And this terrifying enemy surfaced, as such enemies often do in the seemingly most innocent and unlikely of places." And the band struck up, we knew we are on safe ground. The singing and acting was good, the theatrics nice, and the staging clever.

For director Maria Aberg (best known for directing Dr Faustus and The White Devil at the RSC) this is her Open Air Theatre debut so there must have been some pressure on her. Creating a giant carnivorous plant, the realisation of which is the linchpin of the show, is not the easiest task, and designer Tom Scutt (Jesus Christ Superstar) makes a game attempt at it - even if, it doesn't always quite come off at every point. The initial plant incarnation looks a bit “Poundland”!

This is the story of geek plant shop worker Seymour (Marc Antolin, very impressive) who is secretly in love with co-worker Audrey (I'd enjoyed Jemima Roper before in Hand Of God and Midsummer Night's Dream but she comes into her own here) who discovers a “strange and interesting new plant” that transforms the fortunes of his Skid Row florist.

Drag queen Vicky Vox makes her theatrical debut here as the voice of said strange and interesting new plant (now named Audrey II) and it is a role that is at the heart of this fun-packed musical. It is this casting of Vox, a member of the band Tranzkuntinental, that is the absolute making or breaking of the show. And she (almost) nails it.

Stuart and I had seen the production's first preview performance last month and now, later in the run, Ms Vox has relaxed and was enjoying it all a little more. In fact she was now getting away with even more of what's she's good at – making for an absolute blast of a performance. It was as her cries of 'Feed me' grew wilder in the 2nd half and she scratched at her crotch with a pitchfork that she morphed into essentially Divine‘s sassier and more fabulous daughter!

Conversely, Matt Willis from Busted seems to have tamed somewhat as the production’s run has progressed. In the earlier preview, he was a standout turn as the evil dentist boyfriend of Audrey's who boasts a maniacal laugh and fondness for nitrous oxide that renders him pure Jack Nicholson in One Flew Over The Cuckoo's Nest goes Twin Peaks. Last night he seemed to have lost some of his allure and descended a little too deeply into self-parody.

Fans of the musical can rest easy though that despite all the scene-stealing by both plant and (to a lesser extent) dentist the romance at its heart, and the score's best song, Suddenly Seymour, remains as moving as ever.

The audience leapt to its feet in acclaim at the show's encore of 'Mean Green Mother From Outer Space' in a flurry of latex green beach balls flung into the audience and fantastical plant-based costumes.

So a great musical, nicely done. But not a patch on the original production, the film or the Menier Chocolate Factory revival a few years back.

Posted by overyourhead at Tuesday, September 18, 2018