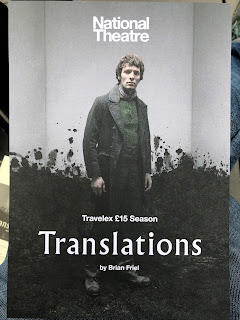 Starring Colin Morgan as Owen, Seamus O'Hara as Manus, Ciaran Hinds as Hugh, and Dermot Crowley as Jimmy Jack Cassie the play tells of the occupation of a quite Irish community by the British and their systematic renaming of Irish place names from Irish to English. There is much fun to be had as the Irish discuss philosophy in their native tongue and speak to each other in Latin while the English simply talk loudly and patronising slowly to try and be understood. Initially Captain Lancey played by Rufus Wright and Lieutenant Yolland played by Adetomiwa Edun are comic English army caricatures. But soon things take a nasty turn.

It was a good night out and Brian Friel sure knows how to write funny line to relive the political tension.


But... enjoyable though the play was - I might have a few comments to make about the narrative - the structure. (Oh dear, he's the playwright - what do I know?)

*** SPOILERS ***
After the English sapper does missing in act two it is as if we have missed out an entire set of scenes. One second he's there all loved up with his Irish girl and the next scene not only has he gone missing but there has apparently played out an extensive back story of his absence being reported to his company, a search has started, questioning has gone on, no one is talking, accusations of foul play have been levelled and the no doubt dramatic scene of his beloved finding he's gone. That is all missed out. We are straight into the "let's have the English come in hard and act like oppressive dicks and threaten to level the place."  Now I'm not saying that wouldn’t have happened but surely it wold have been more powerful to show how the initial fragile bonhomie between the Irish and English deteriorates. It would have been way more dramatic to show the uneasy trust crumble than just has it disappear in a puff of smoke. It's not so much that it's too fast a change in the action as it's a seismic one. There's more drama to be had speeding down a steep hill and crashing into a wall than falling off a cliff. Both achieve the same end but one seems like misfortune, one seems like fate. Fate is more dramatic happenstance.

And I can't help but feel the play had an ending that was too sudden. So sudden it made us look at each other in surprise. "Oh" we said. "Is that it?" We felt a bit robbed of the final show down. Where was the Irish fight back? The riposte. The cry of pain.

So mild structural issues aside, we really enjoyed it.