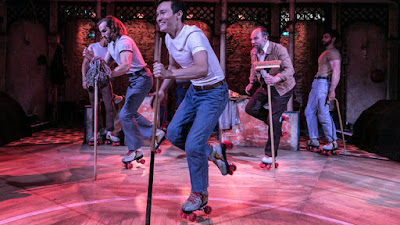 Last night Stuart and I went to see the roller-skating musical The Rink at the Southwark Playhouse in London's glitzy Elephant and Castle.

A roller-skating musical, you say? What's not to like?

The Rink is a musical with lyrics by the fabulously talented Fred Ebb and music by the equally talented John Kander - their tenth Kander and Ebb collaboration. The book was by Terrence McNally.

And you would think that with these writers on board - who had penned such sensational musicals as Cabaret and Chicago – they would know how to hit it out of the ball park every time. But getting the chemistry just right in a musical isn't perhaps as easy as it first seems.

The musical focuses on wise-cracking tough-cookie Anna (the brilliant Caroline O’Connor), the owner of a dilapidated roller skating rink on the boardwalk of a decaying American seaside resort, who has decided to sell it to developers. Complicating her plans are her prodigal hippy daughter Angel (less well cast Gemma Sutton), who returns to town seeking to reconnect with the people and places she long ago left behind. Through a series of flashbacks, revelations, and minimal forward-moving plot development, the two deal with their pasts in their attempt to reconcile and move on with their lives.

And it's this minimal forward-moving plot development that lets the piece down the most. When the show was first put on it got what is often referred to as "mixed" reviews. For mixed read savage.

In fact, the show closed early on Broadway (despite starring Liza Minnelli as Angel and Chita Rivera as Anna) barely making its money back. In the West End in 1988 it ran for just 38 performances.

In The New York Times, critic Frank Rich described the show as "turgid" and "sour," filled with "phony, at times mean-spirited content" and "empty pretensions." Of the book, he wrote, "Mr. McNally is a smart and witty playwright, but you'd never know it from this synthetic effort. His dialogue is banal, and his characters are ciphers."

Reacting to the bad reviews, the show's composer, John Kander, commented that the show "was the most complete realization" of his intentions of any production he had done. Lyricist Fred Ebb agreed, asserting that "Every single element of it was exactly as we imagined. Up there on the stage were two of my best friends, Liza and Chita. It was an overwhelming experience; and when they weren't treated well, it was as if we had gotten attacked on the street.... That show hurt me more than any show I've written.... I felt that I had let them down."

So what did we think of it? Well, it was certainly an enjoyable evening – and the show was good - but not without its failings. The performances were great and some of the songs truly fantastic. But only some of them. For every good song like Chief Cook and Bottle Washer, Don’t 'Ah Ma' Me, The Apple Doesn’t Fall (Very Far From the Tree), and What Happened to the Old Days? was a soppy meandering missed opportunity like Mrs. A, Angel’s Rink and Social Center, and Blue Crystal. Which was a shame.

The show started as a high-energy powerhouse with Caroline O’Connor commanding the stage. She had us grinning for ear to ear as she strutted around the small Southwark Playhouse stage singing of a wronged life and new found female empowerment. It was both funny and those initial songs very catchy. However once the hippy daughter Angel appeared things seemed to lose their way and by the end of Act I had taken a distinct turn downhill. That said, some of that earlier momentum was recaptured during the second half - not least when the boys donned their roller-skates and performed their show-stopping tap-routine, the fabulously campy The Rink. These gems were just too few and far between though. The plot was just going nowhere.

For a plot to work in musicals the characters have to be so brimming with emotion (joy, rage, love, distress etc.) that the only way they can express themselves is to burst into song. Sadly, this emotion just wasn't written into the book of The Rink. Roughly half the musical numbers were let down by piss-poor plotting. The characters were given no reason to sing.