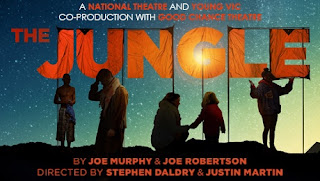 Last night Stuart and I went to see The Jungle at the Playhouse Theatre in London's glitzy West End.

This extraordinary play set in the Calais Jungle is vivid and complex in its portrayal of human resilience in the face of humanitarian catastrophe.

Joe Murphy and Joe Robertson’s piece, directed by Stephen Daldry and Justin Martin, transports you into the world of the camp, where a community forged from necessity shares its unimaginable stories of hope against all odds.

The Playhouse Theatre’s radical in-the-round transformation recreates the intimate staging of The Jungle and we were slightly over-awed as we took a seat at a bench and table in the vibrant and bustling Afghan Café at the heart of the Calais Jungle.

"How did you survive?” asks a young British volunteer of a refugee in the migrant camp that sprang up out of the mud like a small city near Calais. "We didn’t," comes the reply. "We are different now." 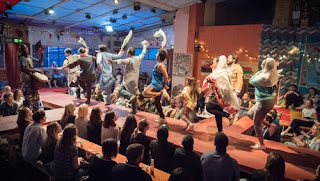 There is nothing neat and tidy about the Jungle or the way human beings behave under pressure or what motivates an individual’s actions. The emotions are always big, because the stakes are so high. The story begins at the end and then snakes back on itself, told by a 35-year-old Syrian, Salfi (Ammar Haj Ahmed), a former English literature student from Aleppo, whose quiet affability disguises his increasing desperation.

One teenager gives a demonstration of the ringtone on his phone: the melody of The White Cliffs of Dover curls across the theatre and has never sounded so melancholy.

It’s not a sophisticated piece of theatre, but it is an extraordinarily effective one.

This is not a play that judges individuals but one that holds governments to account. The British and French authorities are shown not just failing to help, but turning their backs on a humanitarian catastrophe.