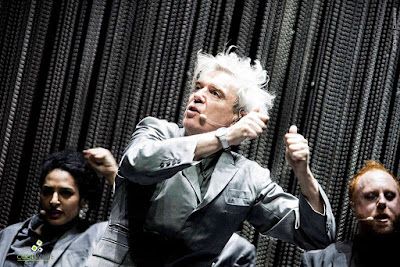 Last night Stuart and I went to see the wonderful David Byrne perform his American Utopia Tour show at the Eventim Apollo in London's glitzy Hammersmith.

When you think of musical innovators many come to mind, but foremost in my mind is David Byrne. The man sure knows how to invent (and re-invent) both himself and his music. He has written rock music, indie, new wave, techno, disco, tribal, World music, ballet, film scores, and musical theatre. He has worked in film, photography, opera, fiction, and non-fiction as a singer, songwriter, musician, record producer, artist, writer, actor, and filmmaker. He has won an Oscar, a Grammy, and a Golden Globe. Basically, the boy has talent.

So it was with some excitement that we assembled at the Eventim Apollo last night for what had been billed as his most ambitious show since the amazing Stop Making Sense tour in 1984. Some boast.

Things started with a single light illuminating a table and chair with a brain on it, to the sounds of the jungle echoing around the PA system. Then Byrne took to the stage alone and the former Talking Heads man sat at the table. A frame of silver beads surrounded the stage and was slowly hoisted up – a pared-back stage set-up which would come into its own as the night progressed – as he leapt to his feet, plastic human brain in hand, addressed the crowd directly and dissected the fake organ, all to the pensive storytelling of ‘Here’. It’s a showy start, setting the tone for an evening that deconstructed the very notion of what a concert can offer.

Byrne is joined by a 12-piece live band, all of whom were barefooted, in grey suits and untethered - roaming around the stage carrying their instruments. At times stringently choreographed, and at others seemingly scurrying about the stage of their own accord, the band all wore a beaming perma-grin. They ducked in and out of that aforementioned curtain of silver beads, changing position like American football players enacting a particularly methodical play. It was a show that blurred the lines between gig and theatre, poetry and dance; a full spectrum of culture under one roof. It was all impossibly slick, no one putting a foot out of line.

In fact, each part of the show felt like an artistic piece on its own. The subtle lighting along with a stage surrounded by the cubic metallic chain curtain meant there was little need for extra visuals. Dance moves delivered by the band were the only accompaniment the music needed; each succinct and well planned movement echoing whatever sentiment the particular song was showcasing.

Of the new songs, 'I Dance Like This' was a particular highlight; with the band all laying on the floor, the piano played like a lament before the industrial noise brought the entire stage to life in a fit of strobe lights and wolf-whistles for the grey haired, mad genius of ringleader Byrne. 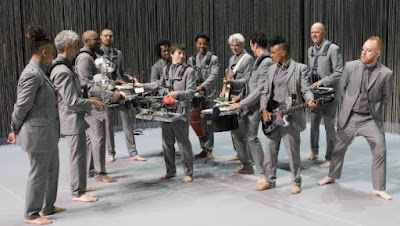 Pure euphoria greeted tracks like Talking Heads classic 'Slippery People', ‘Once In A Lifetime’ and ‘American Utopia’’s dancefloor-busting lead single ‘Everybody’s Coming To My House’. As the crowd threw their hands in the air and inhibitions to the sky, the band stuck to the script, swapping places and moving around the stage in ruler-straight lines.

Byrne played his role to perfection all evening with his own bizarre dance moves (none more so than when he recreated his gun-shot dance during the afore mentioned 'Once In A Lifetime') and still phenomenally powerful voice driving every song with incredible energy. Huge smiles and heartfelt thanks emanating from the stage showed how much joy he, and every band member, got out of performing this show.

In-between songs, Byrne shared anecdotes about how he campaigned to get people to vote in America and how he feels local councils and their influence is so important. All this was met with huge cheers.

As the night progressed, the set-up morphed somewhat. Jazzy Talking Heads track ‘Blind’ saw Byrne’s bandmates wheel a single, illuminated lamp to the front of the stage, which cast huge shadows of the performers on the back of the stage, creating a dizzying change in perspective.

A set-closing ‘Burning Down The House’, meanwhile, saw each outing of that anthemic titular hook paired with flashes of crimson light which flooded the stage. The band returned for the first of two encores, which ended with the stunning, percussive Talking Heads hit ‘The Great Curve’, snarling guitar solo and all. It was a moment that resulted in one of the night’s most touching breaks from the script, as Byrne’s guitarist skipped off post-solo, only to be greeted with a sneaky, congratulatory fist-bump from one of her bandmates stood at the side of the stage

Ending the evening on a more cerebral note, Byrne and band returned to the stage a second time, stood in a stony-faced straight line. “This is a song by Janelle Monae – she sung it at the Washington Women’s March,” Byrne announced, “With her blessing, we have continued to update it. Sadly, it is as relevant now as it was then. You may not know the names in this song, but Google them – you’ll soon find out very quickly.” What followed was a breath-taking rendition of Monae’s ‘Hell You Talmbout’, a drum-backed, chanted list of black Americans killed by police. It was a captivating end to a brilliant show.

The American Utopia Tour is quite simply majestic. It is slickly choreographed, crisply delivered and oozes class, with a uniqueness that only an innovator like David Byrne could bring to the stage.

The full set-list was:-

Posted by overyourhead at Wednesday, June 20, 2018