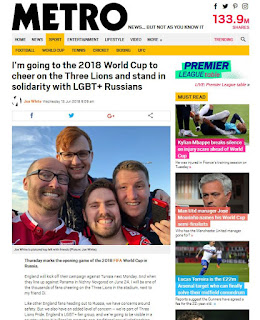 In today's Metro, Joe has written a great piece about going to the World Cup. What's more, it contains pictures of me!

Thursday marks the opening game of the 2018 FIFA World Cup in Russia. England will kick off their campaign against Tunisia next Monday. And when they line up against Panama in Nizhny Novgorod on June 24, I will be one of the thousands of fans cheering on the Three Lions in the stadium, next to my friend Di. Like other England fans heading out to Russia, we have concerns around safety. But we also have an added level of concern – we’re part of Three Lions Pride, England’s LGBT+ fan group, and we’re going to be visible in a country where it is illegal to promote non-traditional sexual relationships.

LGBT+ Russians have been beaten up, imprisoned and, in Chechnya, said to be killed for being themselves. There are no openly LGBT+ male players on the elite stage in football and no openly LGBT+ officials at the World Cup. As with the domestic season, LGBT+ visibility can only come from the fans. In recent years, governing bodies such as FIFA, UEFA and the FA have understood that they need to do more to tackle homophobia, biphobia and transphobia within the game. Slowly, fans are realising that discrimination against LGBT+ people is just as unacceptable as racism, sexism and ableism. More needs to be done to tackle discrimination within the game on all fronts. While it isn’t illegal to be LGBT+ in Russia, since the introduction of the anti-propaganda law, attacks on the LGBT+ community have risen sharply and the community now face prejudice and violence on a daily basis. Russian politicians have described gay pride as ‘satantic’ and compared being gay to bestiality. There is a struggle for visibility of LGBT+ inclusion within the public sphere without falling foul of the law.

The spectacle of a World Cup, with the added safety and security it brings, has given the opportunity for fans to visibly stand in solidarity with LGBT+ Russians as well as raise the conversation about LGBT+ inclusion within sport and broader society. I’m going to the World Cup because it is the biggest competition in the world and, as a lifelong football fan, I’ve wanted to attend a World Cup for years. I remember the heartbreak as a nine-year-old when Seaman was lobbed against Brazil in 2002. I still live the pain of the penalty defeat in 2006 against Portugal, the goal that was never given in 2010 and the flop of 2014. The passion of the game is embedded in every fan, from whichever nation in the world. Football has the power to use that passion for creating social change and improving the lives of millions worldwide – standing in solidarity with LGBT+ Russians is an important part of the trip. Meetings and events are already planned, conversations are continually being had. Since news broke of the threats we have faced for daring to discuss LGBT+ equality within football, the international response and largely positive reaction has been superb – the media have begun to shine a light on the difficulties LGBT+ fans face, as well as the day-to-day reality for many LGBT+ Russians. I collected my ticket last weekend, and when I did felt an instant air of excitement with an undertone of apprehension – I’m still not sure whether I’ll be safe or whether there will be any further threats of violence against us. Regardless, come next Thursday my exams season will be over and I’ll be packing my bags for Moscow, ready to stand proud and cheer on the Three Lions."
Posted by overyourhead at Wednesday, June 13, 2018