The Turn of the Screw... 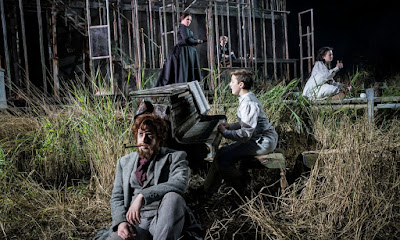 Last Tuesday night Stuart and I went to see Benjamin Britten's The Turn of the Screw at Open Air Theatre in London's glitzy Regent's Park.

Presented in association with the English National Opera The Turn of the Screw is based upon Henry James' classic horror novella and tells the story of two possessed children and their new governess. Throw in a couple of ghosts, a hatter-mad housekeeper, and the spooky rustling of the trees at the Open Air Theatre and you have the makings of a corker of a show. The setting works superbly well and you even feel a chill to the spine as you watch a battle for possession of children’s souls in the gathering dusk.

Sadly though, this is not one of Britten's greatest pieces. However, Timothy Sheader's slick direction and Soutra Gilmour’s broken greenhouse set more than make up any shortcomings.

Two casts share the roles during the week’s run. Our particular cast were excellent; Elgan Llŷr Thomas as the Prologue, Sholto McMillan and Ellie Bradbury as creepy Miles and Flora, William Morgan and Rachael Lloyd as ghostly Peter Quint and Miss Jessel, and Rhian Lois and Sarah Pring as the put-upon Governess and the housekeeper Mrs Grose.
Posted by overyourhead at Thursday, June 28, 2018