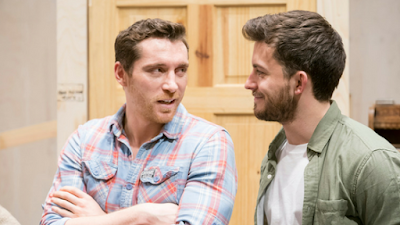 Peter Gill first achieved fame for his theatrical restoration of DH Lawrence. And in this, his own play he has vividly brought to life those Lawrentian qualities of emotional intelligence, raw honesty and fascination with the intersection of class and sex.

In outline it sounds like a gay love story. George is a farm labourer who gets involved in an early 1960s production of the York Mystery Plays: John is the shy assistant director who comes to woo him back to rehearsals when he withdraws, ostensibly to look after his widowed mother. The two men's physical and emotional rapport is palpable. But Gill shows, with rigorous honesty, the obstacles that lie in the path of a long term relationship.

Significantly, sexual bigotry is not one of them: even if the play has echoes of Lawrence's The Daughter-in-Law it never turns into a battle for possession of George between his mother and lover. What Gill is writing about is the dual stranglehold of class and roots.

For John, a metropolitan careerist, the Yorkshire countryside has an exotic otherness of which he can never fully be a part. Equally George, although he visits London and relishes its early sixties intellectual fever, is wedded irrevocably to the land. In the end it is he, as much as the anonymous author of the medieval mysteries, who turns out to be the true York realist.

What is startling about the play, given Gill's Welsh origins, is its profound Englishness: it is about the way the English, however hard they try, can never finally escape their origins. But, far from being emotionally conservative, the play is adventurous, witty and fresh.

At a time when sexual acrobatics are all the rage, it captures the hesitant growth of love between two men with rare tenderness. It is also funny not least in the almost embarrassed enthusiasm George's family display after their visit to the Mysteries. "It was very Yorkshire, wasn't it," cries George's mother carefully adding: "Not that I mind."

Robert Hastie's production has the same spare honesty as Gill's writing and is superlatively played. Ben Batt (yes, that sexy bad-boy off of Shameless) endows George with exactly the right blend of Yorkshire grit and unashamed delight in his sexuality: it is John played by Jonathan Bailey (yes, that cute one off of Doctor Who and W1A), as the supposedly sophisticated Londoner, who is the more tentative. And there is exemplary support from Lesley Nicol (yes, that cook off of Downton Abbey) as George's mother whose love takes the form of unspoken understanding. The play comes like a rare blast of reality.
Posted by overyourhead at Tuesday, February 13, 2018