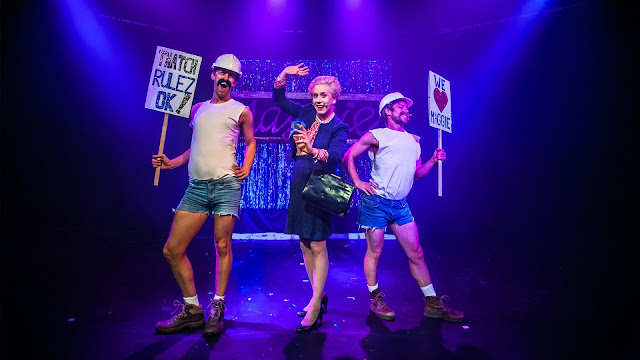 Last night Stuart and I went to watch two performances - a new gay play Stud and the smash hit Margaret Thatcher Queen of Soho - both at The Vaults in (or rather under) London's glitzy Waterloo.

The Vaults is series of performance venues joined together by a warren of arches, tunnels and passageways under Waterloo Station. It's a maze populated with bars, cafes and performing spaces. It is arts at its most immersive and most alternative. A maze of the amazing.

Their mission is to collaborate and conspire, embracing artists from all walks of life to come together and inspire others. It is underground art that is challenging, accessible and imaginative. These underground arts are literally underground.

At the moment The Vaults are running the Vaults Festival 2018 - a series of plays, performances and happenings - and we were lucky enough to see a couple of things - new gay play Stud and cabaret piece Margaret Thatcher Queen of Soho.

Stud was a bit rubbish to be honest. It was on the face of it right up my alley. It was two-hander about gay footballers. Joey Phillip plays Tom and Liam Bergin played all the other characters.

"Tom’s sixteen. His family home is falling apart. His mum has left and his depressed Dad can’t pay the bills. The only light in Tom’s life is football: He lives it and breathes it. Going pro is Tom’s chance to make life better, for everyone... But Tom has a secret (spoiler alert: here's gay), one that could cost him his career."

The script was a bit like when straight people write a piece about the gay experience and get it a bit wrong. Stud tried to be funny, defiant, inspiring but the gay characters were rather clichéd, and homophobes all rather over-cooked. Yes, there's a problem in football - there are currently no openly gay or bi players at any level of male professional football in Britain - but I'm not sure this adds much to the debate. The Pass and Wonderkid both tackled this issue better.

On the other hand, the second thing we saw, Margaret Thatcher Queen of Soho, was a God-damned riot! We laughed our socks off from start to finish.

Matt Tedford plays Margaret Thatcher who stumbles into Soho on the eve of the vote for Section 28 and becomes an over-night all-singing, all dancing cabaret star. There starts a big gay odyssey about gay rights, the 80’s and disco.

As the Iron Lady herself might say, "Where there are discos, may we bring harmonies."

Tedford is as caustic as Dame Edna Everage, twice as camp and packs a mighty political punch. His side-kicks Nico Lennon and Ed Yelland get to play everyone else in the piece - from 1980s Tory cabinet members, Churchill’s portrait, arch-enemy Jill Knight, Sex-God and punk Peter Tatchell, sleazy MPs, sleazier yuppies, Grange Hill kids, the list goes on.

One thing I did notice though - Tedford's Thatcher did look uncannily like Martin Gore of Depeche Mode!
Posted by overyourhead at Friday, February 16, 2018