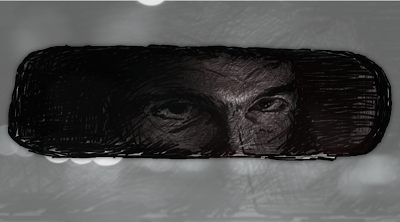 Last Sunday night Stuart and I went to a performance piece called Rubber at The Vaults in (or rather under) London's glitzy Waterloo.

Part of the Vaults Festival 2018, Rubber was performed in a real, moving car by two actors for just Stuart and me. We were buckled up in the back seat. The two actors played Jess and Tom - on the face of it a bickering couple - the latter of whom drove us around Waterloo for about an hour. And it was intense. Fucking intense.

Jess and Tom were in a loving relationship and just having a bit on an off day, right? Oh no. This got ugly fast. Jess loves Tom alright. And Tom loves Jess too... well, that and money... and power... and drugs.

It was immersive theatre at its finest. As a piece of realism it was superb. It was a unique, inventive, innovative, and immaculate experience. And fucking scary.

Rubber explores the tough realities of emotional and physical dependencies that the millennial generation can be driven to by a world that increasingly doesn’t want them. If we live in a society where people have to turn to sex work just to pay the bills how can one man’s struggle to control himself compete with one woman’s struggle to break free.

If you go see it - and I do strongly recommend you go and see it - fastened our seat-belts, it's going to be a bumpy night.
Posted by overyourhead at Wednesday, February 21, 2018