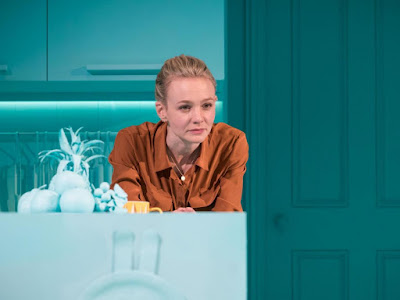 Written by the marvellous Dennis Kelly this solo show about a disintegrating marriage is directed by the wonderful Lyndsey Turner.

Carey Mulligan - or Sally Sparrow 'the assistant that got away' as we Whovians like to think of her - made her stage debut at the Royal Court when she was just 19 years old playing a narcoleptic teenager in Kevin Elyot’s Forty Winks. She was back at the Court three years later in The Seagull. And then in the West End in David Hare’s Skylight four years ago. Now she is back on home turf - and what a show it is.

We get taken on an extraordinary journey from the fourth wall breaking chummy laughter of a stand-up comedy routine to the bleak arctic wastes that lie on the other side of terrible tragedy that really punches you in the gut.

Her outspokenly funny chats are interspersed with glimpses of her at home playing with her two small children. The set is awash with a pale blue shade apart from the odd children's toys. Only the children aren't actually on stage with her - and you think you know why - it is the theatrical convention whereby adult performers interact with invisible infants. But then the big reveal comes and the strained and artificial play-acting becomes all too poignant.

Are all men born bad? Of course not. Is every man a disaster waiting to happen? Maybe. Do boys destroy and girls create? Not exclusively. Kelly's writing here is funny, vital, relentless and vivid. A remarkable return for Mulligan.