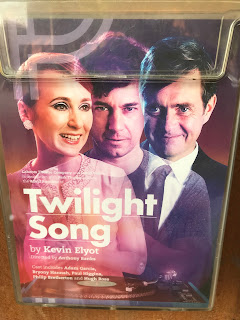 Starring Adam Garcia, Bryony Hannah and Paul Higgins it is the rather disappointing premiere of the final play by Kevin Elyot, writer of the classic comedy My Night with Reg.

Barry (Paul Higgins) lives with his mother Isabella (Bryony Hannah) in a London Victorian villa and they both feel trapped. Slippery bisexual estate agent Skinner (Adam Garcia) provides some relief for Barry but no one seems particularly happy with their lot.

Rewind 50 years and we meet Isabella in an unhappy marriage and two gay uncles. Enter stage left bisexual handyman Adam Garcia again (playing a cross between Joe Orton’s Mr Sloane and DH Lawrence’s Mellors) who seduces Isabella and viciously blackmails one of the uncles. It does not end well.

This is by no means a major play and not a patch on the outstanding My Night with Reg. Maybe it would have improved with some rewrites. Something we shall never know as sadly Kevin Elyot died before the play was ever produced.
Posted by overyourhead at Thursday, July 20, 2017