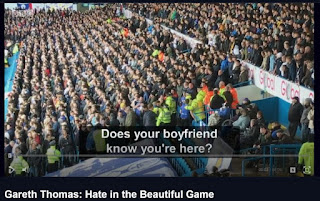 Fantastic BBC documentary by Gareth Thomas on homophobia in football. OK, it's the idiot minority on the football terraces and social media online that cause the vile offence but it's pretty obvious the problem is perpetuated at the top of the game too. If it's not made illegal (I though it was!) to make homophobic comments at a football ground then how can stewards do their job and get these "fans" arrested and banned?
And what about supporting a professional player coming out? The Professional Footballers' Association have had a diversity person in place for 17 years but no actual policies in place. The Premier League say "we support Stonewall" as if that's an answer. The FA chairman didn't even want to know. Morons. Time for Government action! Drag them into the 21st century!