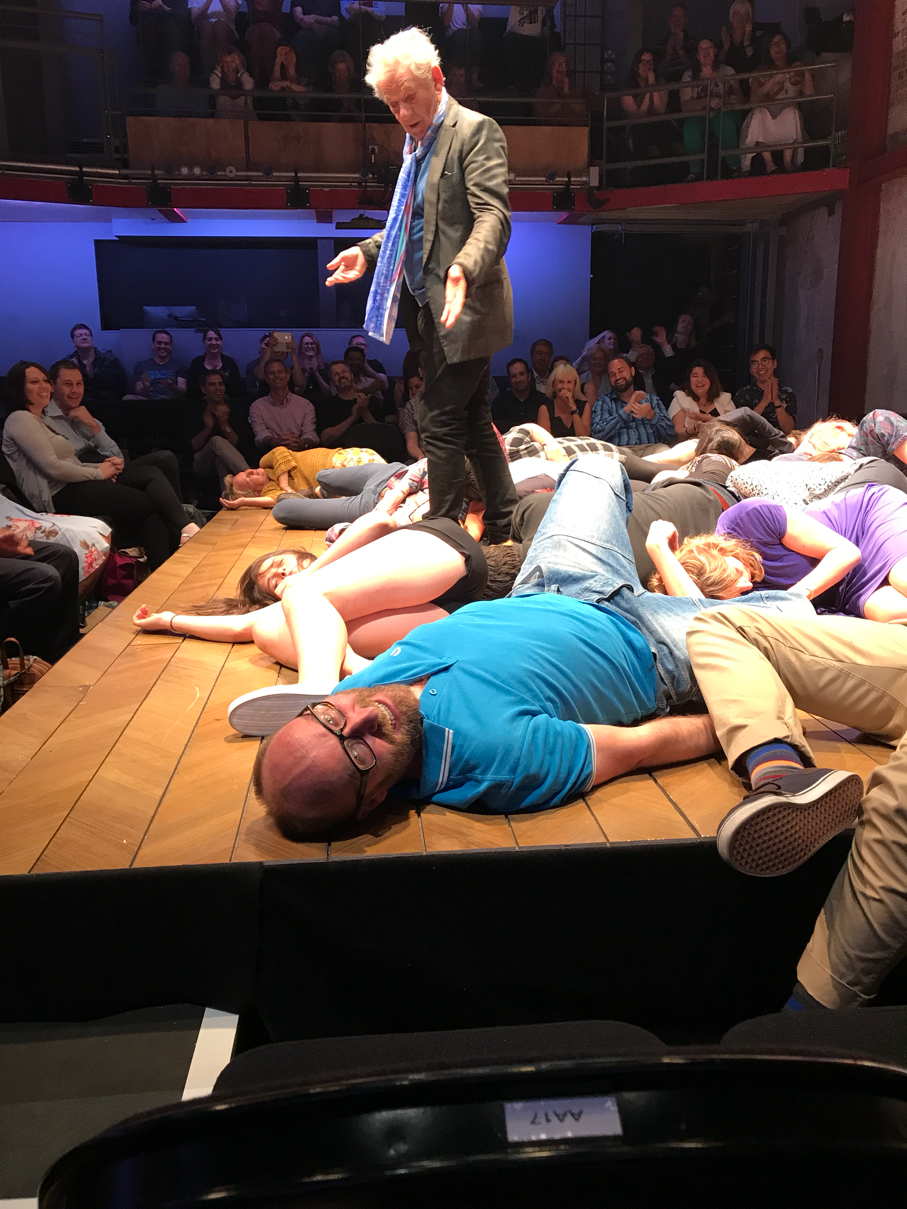 And I was on stage with him too! (More of that later.)

The show starts in darkness. Then a great blast of the soundtrack from The Lord of The Rings - and in the pitch black, the instantly recognisable voice of Sir Ian McKellen, warm, craggy, emphatically dramatic, quietly roaring out words from Tolkien’s novel.

Lights up, and there he is - Gandalf in the flesh, Gandalf unplugged; dangling off an uncomfortable stool, dandyish in tight black trousers, dark jacket, low-trailing knotted scarf - giving us page after page and a line to conjure with: "You cannot pass!". Yes, let it be known, the celluloid catchphrase for which he is renowned the world over ("You shall not pass!") is nowhere in the original.

He has been reading from the paperback copy he carried with him on set in New Zealand, no less, and the incorrectly quoted catchphrase is just one of the minor insights and friendly asides that made this fancily priced fundraiser for the valiant - publicly unfunded - Park theatre in north London worth every bank-breaking penny. You might argue that there were even better causes for McKellen, 78, to harness his renown to, but there’s no quibbling about the underlying wisdom of this soirée - not an ego fest, more a wry, wistful love letter to the medium that made him and a walk down memory lane with us not as gawping admirers but confided-in pals - the secret, really, of McKellen’s success: not lofty knightliness but spry mateyness.

The first half teemed with childhood memories of Wigan and Bolton – his transformative theatre-going, watching from the wings, then early days in rep.

Literary passions rather than personal confessions dominated, although a glorious tranche of Wordsworth’s The Prelude acted as a droll detour to his coy coming-out to his family at the age of 49. There’s a memorable rendition of the first chapter from Bleak House but it’s not all serious – he draped his scarf over his head, puckered his lips and camped it up as Widow Twanky to roars of approval.

Gerard Manley Hopkins’ "The Leaden Echo and the Golden Echo" – that echoing, wheeling lament for lost beauty and youth – brought us to the poignant close of the first half. He’d already sung for his supper – but then there was a full hour of Shakespeare: a serving up of golden hits, in which the ghosts of performances past were summoned, among them Justice Shallow, Romeo, Macbeth and, bringing us to the present, lines from Sir Thomas More in defence of immigrants.

If it’s a crime to abuse the dispossessed, you were left feeling it would a crime too for this not to have been filmed and so reach a wider audience. A palpable hit.

Oh and towards the end anyone was invited up on stage to act out a scene with Sir Ian (from Henry V but with a wine menu as the script - you had to have been there). Guess who volunteered?

Oh and we bought two bottles of Sir Ian McKellen wine to take home with us too - all profits to the fundraiser so all in a good cause! Honest! 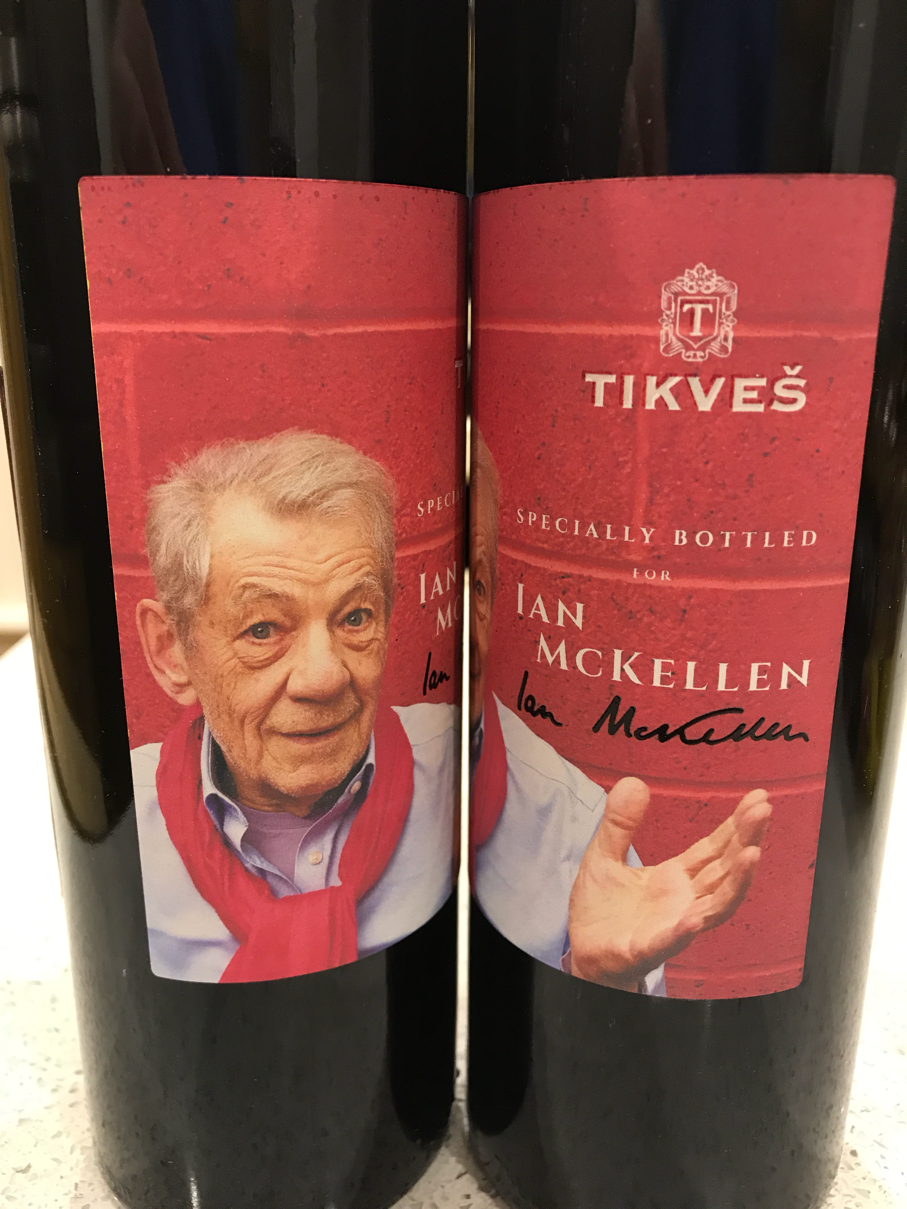 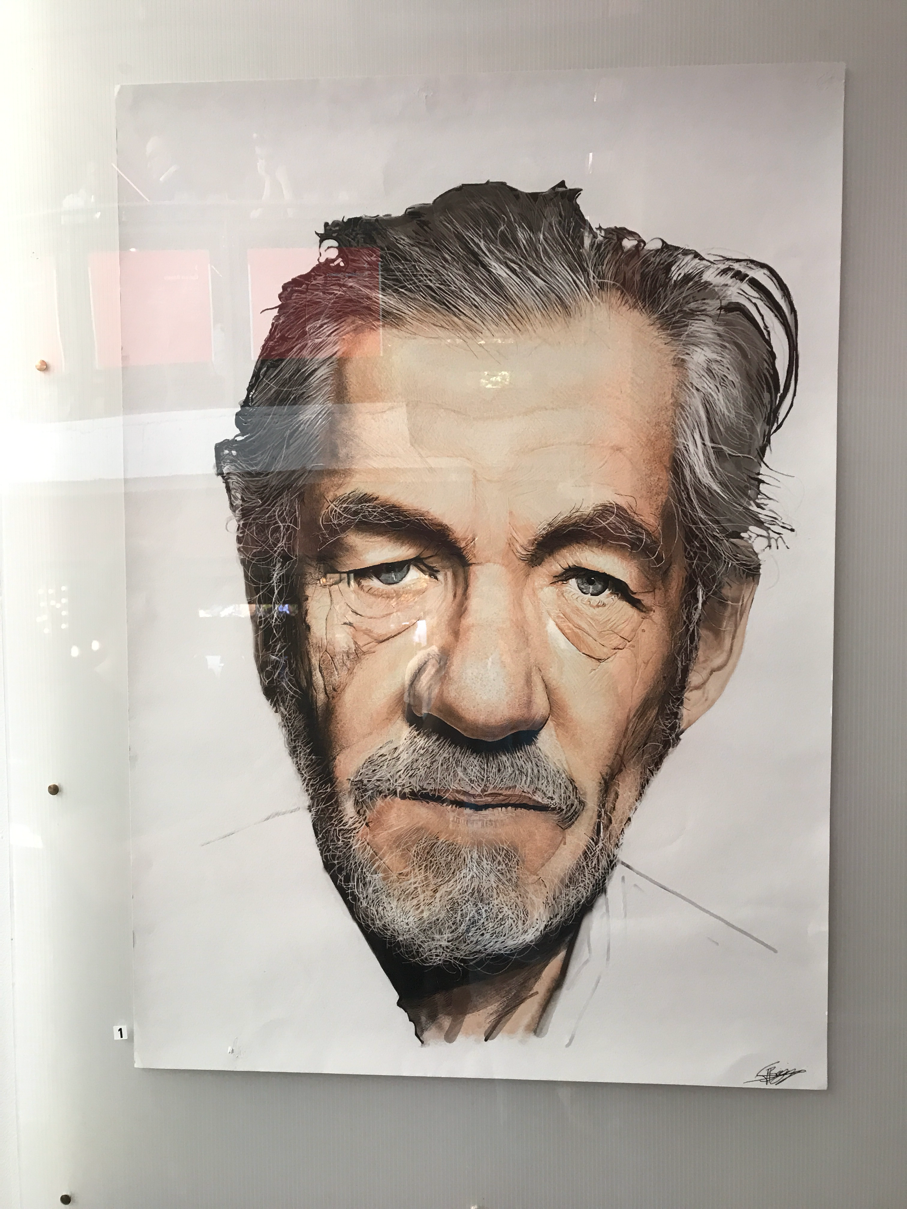 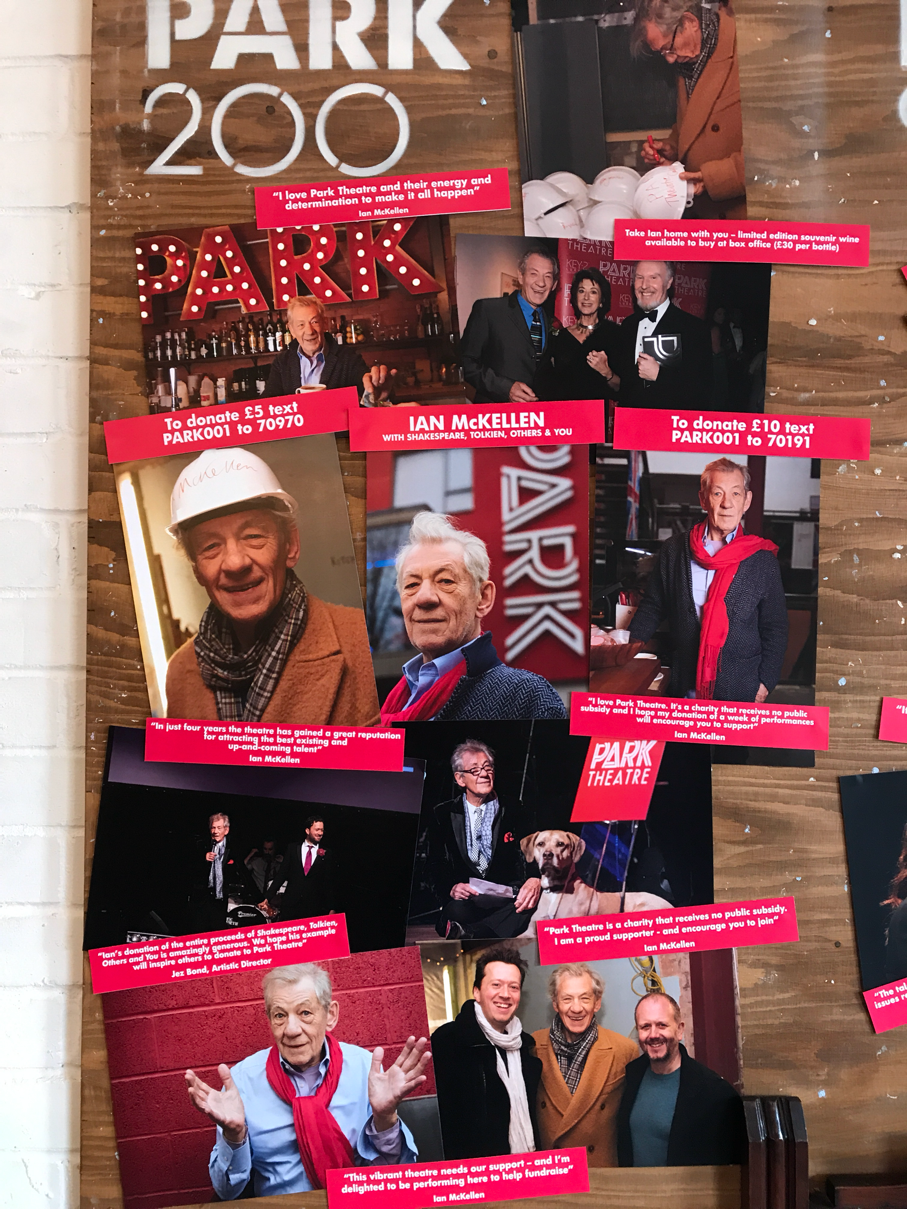 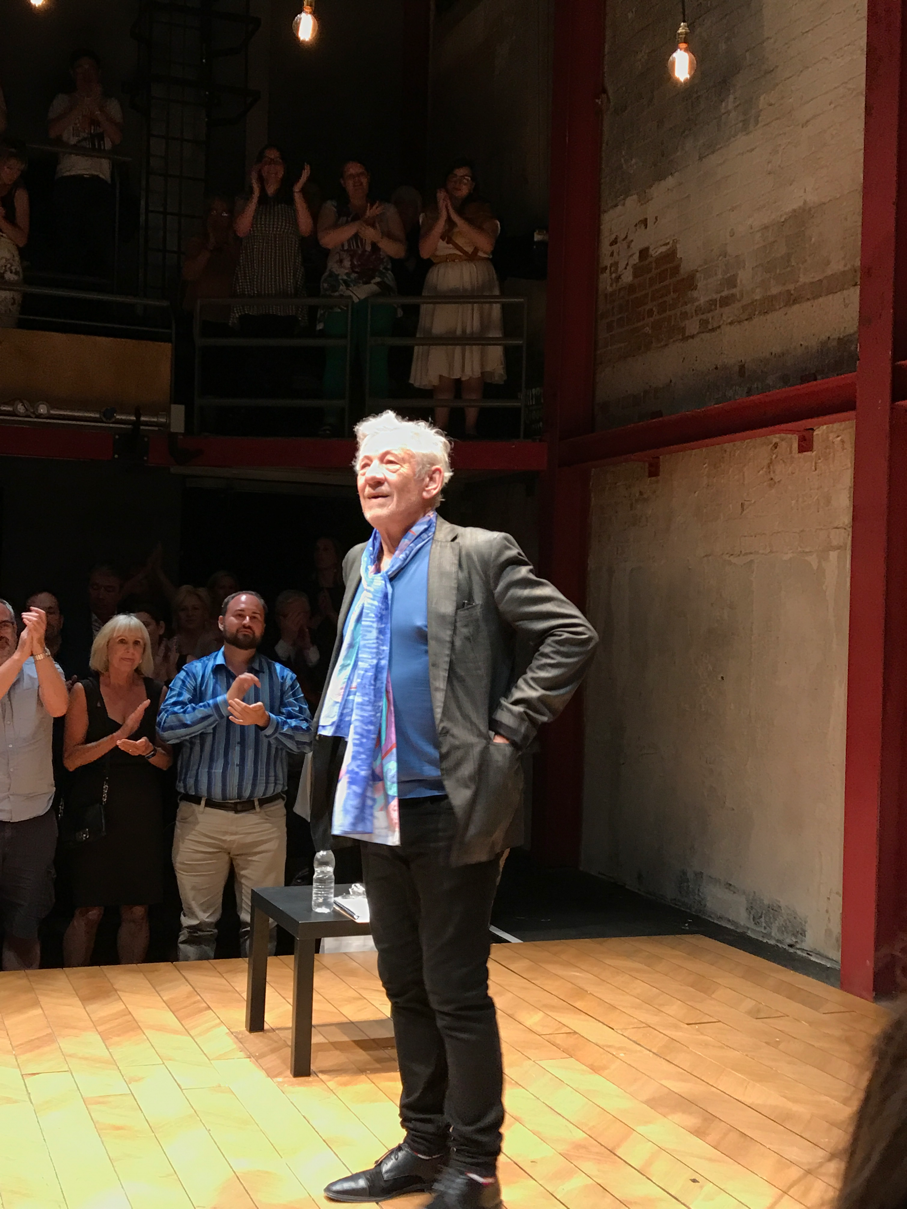