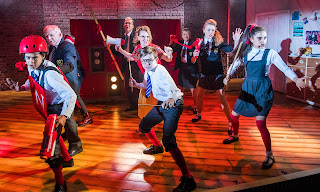 Last night Stuart and I went to see Adrian Mole The Musical (or to give it its full title Sue Townsend's The Secret Diary of Adrian Mole Aged 13 3/4 The Musical) at the Menier Chocolate Factory in London's glitzy London Bridge Quarter.

We have a Tory Government, a woman Prime Minister, and austerity is biting - yes, we are in 1981. And everyone's favourite teenager Adrian is growing up.

STTSDOAMA1334TM (as nobody is calling it) was a lot of fun. It tells the rather episodic story of the eponymous Master Mole, his adolescent life, his newfound loves and his struggle to fit in. Everything is a challenge for Adrian - being an 'intellectual', the wretched school bully, a new girl Pandora who he falls for, his poetry, trying to dance, his spots, and his mother leaving his Dad for the next-door neighbour... And it's all very funny indeed.

The songs are good - with many parodies of various styles from tango to Les Mis. It's a bit Blood Brothers, a bit Inbetweeners, a bit Our House, a bit Harry Potter, and a bit Made in Dagenham.

It is a British musical through and through that is not afraid to wear its 1981 sensibilities on its sleeve. It stays fairly close to the original novel along with mentions of Thatcher, Lady Di, Charles, and the casual sexism of the day. Some of casual sexism was perhaps a little near the knuckle for even my post-modernist taste even taking into account the ear it was set. "Women are like horses - they should be beaten, whipped and ridden," says one old man. Hmmm. OK, played for a laugh but substitute the word 'women' with 'black people' or 'gay people'... OK, you get my point.

But that aside, it was a very funny show which we thoroughly enjoyed.