Wow! People have really taken against this play. And I'm scratching my head to see exactly why. Ok, it wasn't perfect, but what play is? Stuart and I both really enjoyed it.

The plot revolves around a woman Mary (expertly played by Anne-Marie Duff) who returns from both the dead and from London to travel up North to reclaim her love (Laura played by Cush Jumbo) and seek revenge on her attempted murderer (Harvest King played by John Dagleish). Mary is taking control, she tells it how it is (often to the audience) and is taking no prisoners. She leaves a wake of death and destruction as she battles those who did her wrong - like a sociopathic version of Romy and Michele's High School Reunion.

Mary's language is deadly too. At one point she c-bombs and then immediately turns to the audience and defiantly states one of the most outrageous and funny things I think have ever heard an actor say to directly an audience from the London stage, "yes, I said "cunt"! And if you don't like I will fist-fuck you and everyone you have ever loved!"  Brilliant!

It is not just a play out to shock though. It is also a play about the enclosure of land in the early days of the Industrial Revolution when the common land of England was under threat. It is a brave play, a play with ambition. It takes on pre-Christian agricultural traditions, it tackles issues of the time that still resonate today (the abuse of women, immigration, industrialisation, and the expropriation of common land) and it permeates its narrative with the recurring motives of birth, death, and survival. Its language is beautiful and the acting within it is first class.

So there you have it. And you can stick your one star reviews or, as Mary would say, "I will fist-fuck you and everyone you have ever loved!" 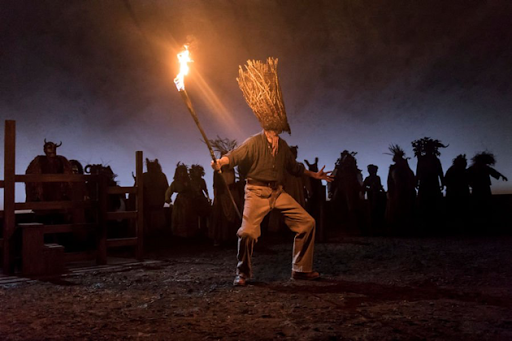