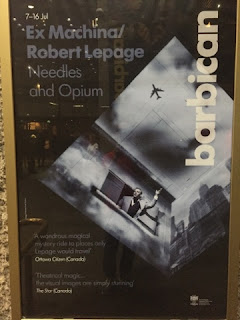 Wow! What a show! The spelling-binding technical wizardry on stage was simply brilliant and worth the price of the ticket alone. A huge rotating cube in the centre of the stage throws the actors about containing hidden doors, trapezes, and awesome video projections. I've never seen anything quite like it. And the story itself is no less thrilling - and disorientating.

Like the set, the tale is a 3-dimensional, tumbling and multi-layered one. In 1949 French writer and filmmaker Jean Cocteau returns from New York full of wonder but chronic disenchanted. In that same year American jazz musician Miles Davis visits Paris bringing bebop to the old continent and making new fans. He starts a passionate relationship with Julliet Greco but it soon turns sour. Both Cocteau and Davis are dependent upon drugs to try and cope with their tortured lives. In 1989 Robert LePage is a lonely actor suffering heartbreak trying to forget his former lover but his torment echoes that of both artists from 40 years before. The three are all in a bad way.

Set against these three tales of addictions, we see hypnotic vignettes as the three characters float and slide through time and space, from a Parisian hotel room to New York streets. Filmic projections, a jazz soundtrack and poetic performances each in turn enchant, confuse and delight.

It is a truly masterful representation of disorientation, confusion and the creative drive.