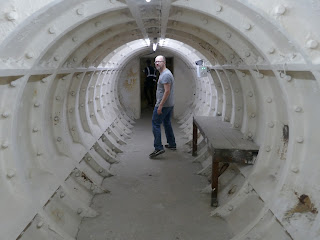 Planned and dug by hand in just eighteen months in early 1940s the tunnels were originally meant as a refuge from the Blitz. It was envisaged that there would be ten sets of tunnels all along the Northern Line and some of the Central Line but only eight were completed. Each set of tunnels could house 8,000 people with extensive sleeping, canteen, recreational, toilet and medical facilities. Rationing was temporarily suspended for visitors to the tunnels so the place was quite attractive for war-torn Londoners. The only complaint was that a cup of tea cost 2d rather than 1d as it did at ground level - but no-one wanted to head back up top for the tea-run. 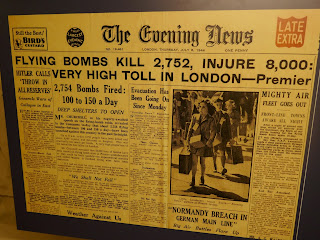 In fact the tunnels actually didn't get used for the Blitz as that had ended just before they were completed in 1942 but by 1943 the new threat of V1 and V2 bombs meant that the tunnels became fresh sanctuaries for thousands. And whereas the Blitz happened at night meaning locals came down just at night time the fresh threat of flying bombs was constant - they landed day and night - which put fresh strain on running the underground city. 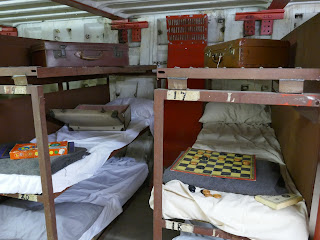 By mid-1945 they had lost their use as the war was over and people wanted to rebuild their ground-level city rather than live under a rubbled one.

The plan even early on was that post-war the tunnels were all going to be joined up to be used a high-speed underground service much like the imminent Elizabeth Line. As London Underground usage in the late 1940s fell away though plans for this were scrapped.

The tunnels found a fresh lease of life though and were used as cheap accommodation for years afterwards.

In 1948 almost 500 West Indian immigrants arrived in London on MV Empire Windrush docking at Tilbury. About 200 were taken to the Clapham South Deep Level Tunnels for processing and temporary housing. They were charged 6d a night for the privilege. Less than a mile away was the Coldharbour Lane Employment Exchange in Brixton, where some of the arrivals sought work. Many only intended to stay for a few years, and although a number returned to Kingston Jamaica the majority remained to settle permanently forming what was to become the core of the British African-Caribbean community in that area. 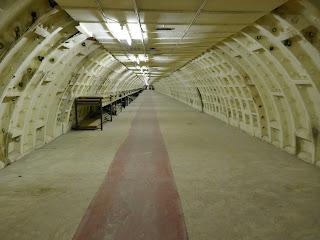 In 1951 punters could get a room in the tunnels during the Festival of Britain when it was rebranded the Festival Hotel and in the following year soldiers were billeted there for King George's funeral. The tunnels even got used as cheap hotels for conferences in London but after the Goodge Street fire the tunnels were closed to the public.

Now get leased out for storage, the odd hydroponics farm and for visitors to have a bit of a nose.
Posted by overyourhead at Wednesday, July 27, 2016