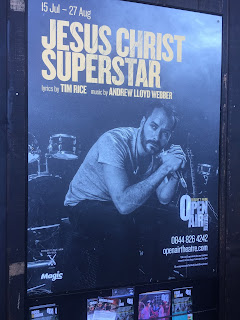 It was a great production.

Celebrating 45 years since the rock opera, concept album and stage show were first created Tim Rice's and Andrew Lloyd Webber's (who was in the crowd) story is loosely based on the Gospels' accounts of the last week of Jesus's life.

It starts with the preparation for the arrival of Jesus and his disciples in Jerusalem and ends with the crucifixion. It strays somewhat from conventional telling however in that it highlights political and interpersonal struggles between Judas Iscariot and Jesus. In fact Judas looms large in the show, who is depicted as a tragic figure dissatisfied with the direction in which Jesus steers his disciples.

Singer-songwriter Declan Bennett, once a member of Brit Award nominated band Point Break, and more recently the lead in the musical Once, takes the role of Jesus. He plays him as a hipster rock star slightly caught up in events as they snowball out of his control.

Huge steel orange-rusty girders back the stage supporting not only the action but also the excellent band - with musical direction by Tom Deering. The sound was really great.

The choreography by Olivier Award-winner Drew McOnie was a real wow too - helped in no small part by the cast who are all played by very attractive, lean, muscled, talented and (let's not forget) scantily clad singers and dancers!

All the hits were there:- I Don’t Know How to Love Him, Gethsemane and the amazing Bond -thematic Superstar.