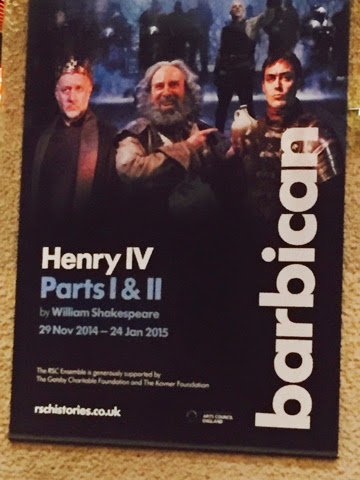 On Friday and Saturday nights Stuart and I went to see the Royal Shakespeare Company production of Henry IV Part I & II.

Starring Antony Sher as the infamous comic knight Falstaff we were also treated to Jasper Britton as Henry IV, Alex Hassell as Prince Hal and Paola Dionisotti as Mistress Quickly.

Part I
With his crown under threat from enemies both foreign and domestic, Henry IV prepares for war. As his father gets ready to defend his crown, Prince Hal is languishing in the taverns and brothels of London, reveling in the company of his friend, the notorious Sir John Falstaff. With the onset of war, Hal must confront his responsibilities to family and throne.

Part II
King Henry’s health is failing but he is uncertain Hal is a worthy heir. Meanwhile, Falstaff is sent to the countryside to recruit fresh troops, where he gleefully indulges in the business of lining his own pockets. As the King’s health continues to worsen, Hal must choose between duty and loyalty to an old friend in Shakespeare’s heartbreaking conclusion to this pair of plays.

The production was fine. Classically staged. But not a patch on Phyllida Lloyd's all-female production at the Donmar last year.
Posted by overyourhead at Monday, January 12, 2015