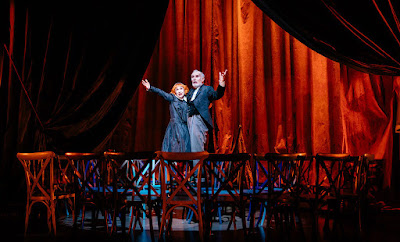 Initially we hear the actors backstage deciding whether they want to put the play on that night or not. "It doesn't make much sense." "Do you think people will walk out?" "Too many words. They'll get bored. And I'll forget them." It's funny - but unsettling.

An old man (Marcello Magni). An old woman (Kathryn Hunter). An empty stage. And the water is rising.

Alone in a room, the couple set out the chairs ready for the arrival of a very special audience. They’ve invited everyone. The dancers, the chancers, the editors, the creditors, the picketers, the hecklers, the Leavers, the Remainers, the Remoaners. Even the bankers. All the movers and shakers are gathering to hear the old man’s final message to humanity. But will the message ever be delivered?

Part-meta, part post-modern, and part panto - translated and directed by Omar Elerian - it's all very silly and a lot of fun.

The audience are part of the performance. I was thrown a handkerchief. Then later I was called up on stage. A bit of chat (the old woman liked my shoes) and then asked to help with the chairs. All in character.

Eventually the Orator (Toby Sedgwick) arrives. The stage begins to attack him.