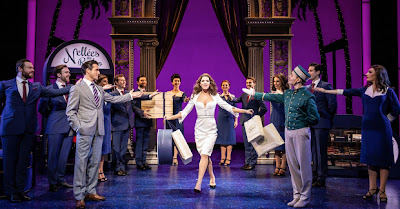 Last Friday night Stuart and I went to see Pretty Woman: The Musical at the Savoy Theatre in London's glitzy West End.

Audiences seem to love it. Critics seem to hate it. I think you might be able to tell who I side with...

Based on the 1990 film of the same name the songs by Bryan Adams are all rather bland and the plot's gender dynamics have aged pretty poorly.

The story is one of a free-spirited ravishing prostitute Vivian and her bestie chasing after men to love them and give them money. Yup, it pretty much fails the Bechtel Test at the first note.

Sure, it's escapist clap-trap but it can't quite decide if it wants to be Cinderella or Pygmalion - the trope of both being that it's the handsome, rich men who hold all the cards (and shoes), the women should be grateful of the attention. There is precious little female backstory.

The shirts might be short, the mini-skirts may be tight - but this just goes to prove how a lot of thought has been given to Vivian's curves, but not much to her arc.

The audience were something else though. Drunk, noisy, shouting out stuff - it was like 1500 people on a hen night. A couple near us got thrown out mid-way through the first act.
Posted by overyourhead at Tuesday, February 08, 2022