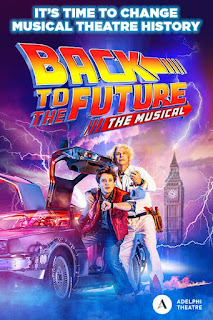 Last night Stuart and I went to see big-budget musical Back to the Future: The Musical at the Adelphi Theatre in London's glitzy West End.

Based upon the 1985 sci-fi nostalgia blockbuster the show is full of songs (some good, some not quite so good), loads of in-jokes, hammy performances, crowd-pleasing call-backs and call-forwards to the film franchise, and buckets good-will to spare.

BttF:TM stars mother-fucking Marty McFly (played solidly by Olly Dobson) who with the help of weird science chum "Doc" Brown (played hilariously by Roger Bart) goes back from 1985 to 1955 to give some dating advice to his dad George McFly (played to the goofiest hilt by Hugh Coles). Farce ensues as Marty mum (beautifully played by Rosanna Hyland) tries to get into  his rather over-padded pants (purple Calvin's if you must know) and they 'all sings songs about it'.

It's a great, fun night out. It won't scare the horses but it does exactly what it says on the tin; a wonderful tribute to the film and the final action sequence alone was worth the price of admission.
Posted by overyourhead at Friday, February 04, 2022