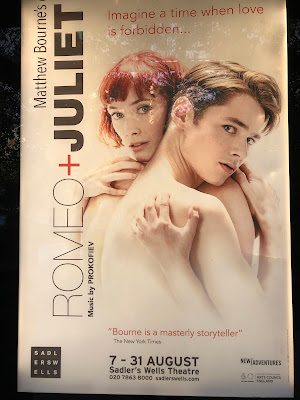 Last week Stuart and I went to see Matthew Bourne's Romeo and Juliet at the Sadler's Wells theatre in London's glitzy Rosebery Avenue.

And in a nutshell, Bourne's latest take on a classic was simply great.

The show was a passionate and contemporary re-imagining of Shakespeare’s classic love story populated by lust-crazed teens and set to Prokofiev’s wonderful score. What’s not to like?

Set inside an asylum known as the Verona Institute, our Juliet (Cordelia Braithwaite) is used and abused by one of the guards, Tybalt. Danced with conviction by Dan Wright, he is a brute, a bully and an abuser, who hits on Juliet and rapes her within the first few minutes of the show. Yes, Juliet needs help and is holding out for a hero.

Institutionalised by his dreadful parents Senator and Mrs Montague, Romeo (Paris Fitzpatrick) soon arrives on the scene. He meets, falls in love, and fights to save our love-struck Juliet with equal gusto. Accidents do happen though, and during a psychotic break Juliet rather lets Romeo down in a rather stabby way.

The cast are all magnificent. Young and fresh, their dancing is vivid and expressive. Bourne has coached them well and their ensemble pieces are at once reminiscent of the demons welcoming Orpheus's descent into the underworld and moments later of the bleachers scene from Grease's Summer Nights.