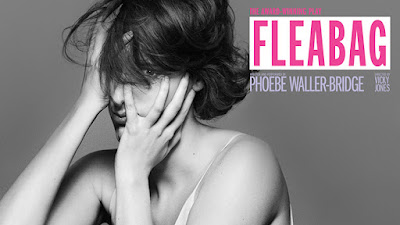 Last night I went to the first night of the critically acclaimed multi-award winning production of Fleabag at the Wyndham's Theatre in London glitzy West End.

Returning to its birth as a one-woman show, Phoebe Waller-Bridge’s award-winning comedic play is a triumph.

For the uninitiated, Fleabag is a rip-roaring look at some sort of woman(!) living some sort of life(!). Fleabag may seem oversexed, emotionally unfiltered and self-obsessed, but that’s just the tip of the iceberg. With family and friendships under strain and a guinea pig café struggling to keep afloat, Fleabag suddenly finds herself with nothing to lose.

The play inspired the hit television series - much ground of which is retrod tonight - and then transferred to a sold-out run in New York. Directed by Vicky Jones, the show has come home to London for just 30 performances.

It's filthy, funny, snarky and touching. A suitable swansong to a great piece of work.

Posted by overyourhead at Wednesday, August 21, 2019