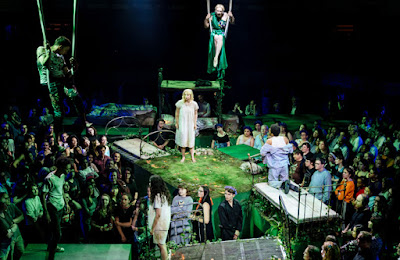 The Bridge has billed this latest production as immersive, but in fact it's really just old-fashioned promenade for the groundlings in the pit, who mill around or are shunted about a bit. The actors appear on various platforms that rise and descend around them, mostly containing variations of beds. And, we got shunted about. A lot.

The star attraction this time around is Gwendoline Christie (playing both Hippolyta and Titania), who was catapulted to fame thanks to her role as Brienne of Tarth in HBO’s blockbuster fantasy series Game of Thrones. Here she is joined not by White Walkers but by David Moorst, Hammed Animashaun, and Oliver Chris.

And they serve her very well; Oliver Chris’s Oberon is very funny, while Hammed Animashaun plays Bottom to perfection, and Moorst is agile as Puck.

Few plays offer themselves to as much gender-fluidity as easily as A Midsummer Night’s Dream, full, as it is, of transient passions and illicit affairs. Hytner’s staging dives right in, even swapping the roles of Oberon and Titania (so that Oberon falls in love with the ass-headed Bottom).

Hytner’s handling of the text is equally fluid. Hey, Shakespeare can withstand all manner of cuts, changes, and swaps. But some of the changes seemed a little haphazard here. What was undoubtedly on the money, though, was the staging, that was both exuberant and energetic.

In fact, this irreverent interpretation had the atmosphere of a party - by the end the whole thing sort of collapses into a massive cast-audience dance party – complete with giant moon balls!