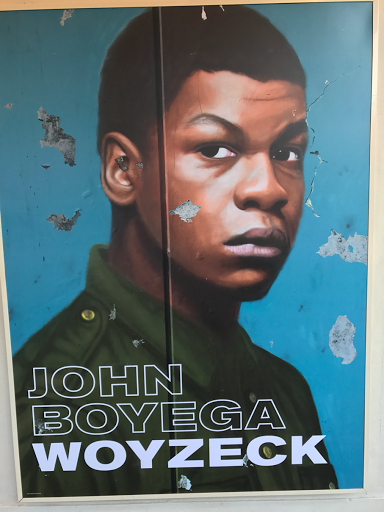 Last night Stuart and I went to see Woyzeck at the Old Vic in London's glitzy Waterloo.

Synopsis: Good play. Rather grim though.

Starring Star Wars: The Force Awakens' John Boyega this Woyzeck is in the British Army living in the grim Berlin apartment in 1981 with his partner Marie (Sarah Greene) and their baby. Unable to afford the rent, he takes part in a paid medical trial and his world starts to fall apart. Big time.

The play is adapted by Harry Potter and the Cursed Child writer Jack Thorne from German playwright Georg Buchner's original work, which was unfinished at his death in 1837. With less philosophising that in many

English translations of the piece Thorne's version is firmly about class, masculinity and mental health.

My only quibble with this version might be that to reinforce the reasons behind Woyzeck's descent into madness Thorne rather over eggs the pudding. We know Woyzeck suffers from mental health issues but let's include:

drug trial (check), jealous personality (check)... the list goes on and on. Yes, we get it. He is not a happy chappy.

The play is certainly dark and yes at times gruelling but Boyega is always compelling to watch. His eventual madness is well handled and we are genuinely shocked when he bangs his head against the wall.

That said, there is much humour to be had from Ben Batt’s roguish, laddish Andrews - Woyzeck's best mate. Mind you, there is a touch of the Iago about Andrews to Woyzeck's jealousy-torn Othello (a role Boyega must

surely play soon). Traitors come in all shapes and sizes, it seems?

Talking of size... Young Batt gets his kit off quite a lot (the programme warns us of full-frontal male nudity) and it doesn't hurt the fact that he's as fit at a butcher's dog.

Oh and the 2017 fashion of using the C-word gets a good old outing here - we counted its use on eighteen occasions. Stuart and I should play Theatrical Sweary Bingo; eyes down for a ‘fuck’ and ‘cunt’.