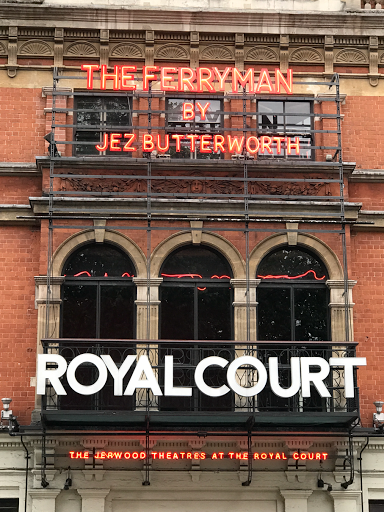 Last night Stuart, Jane, Sara and I went to see new play The Ferryman at the Royal Court in London's glitzy Sloane Square.

Synopsis: This is a play that deserves all of its five star reviews. Gripping, funny, tragic and enlightening. It also deserves all the awards that will surely be heaped upon it. Fight for a ticket. Do not be put off by the three and half hour running time either - it simply flies by.

Jez Butterworth’s new play starts with the discovery of a body. For ten years, Seamus Carney has been lying in a bog near the Irish border. Throughout that time, his wife Caitlin has been living with Carney’s brother Quinn and his seven children in a warmly chaotic Armagh farmhouse while upstairs Quinn’s wraith-like wife languishes in bed.

But as the Carney family gather to celebrate the day of the harvest, this other, uglier harvest from Northern Ireland’s bloody soil cannot be ignored.

Starring Paddy Considine and Laura Donnelly and directed by Sam Mendes, it’s easily the best new play of the year and arguably as mighty as Butterworth’s 2009 smash hit Jerusalem. Where that play exuberantly summoned the unquiet souls of a mythical rural England, this one does something similar for Northern Ireland but this time through the concrete political context of 1981.

Bobby Sands is on hunger strike, Margaret Thatcher is on the radio and the IRA are on the streets. Considine is tremendous as Quinn, the ex-IRA member and committed family man struggling to suppress both a violent past and a treacherous love for Donnelly’s bright-eyed Caitlin.

An ominous sense of foreboding stalks the play and the ending is all the more shocking for it.

Butterworth is as interested in the future as he is the past. In a crack cast Tom Glynn-Carney stands out as hothead 17-year-old Shane, who makes an easy recruit for a revolutionary cause.

If you haven’t yet got tickets for the West End transfer of The Ferryman then you’d best get on the case, fast! A Broadway transfer must also beckon.

Oh and the excellent cast is joined on stage at various points by a live rabbit and a live goose. Reason enough to go see I would have thought.