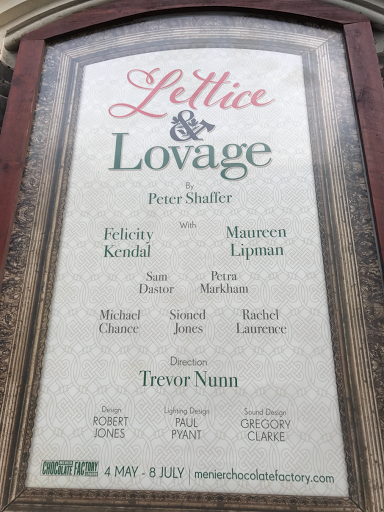 Last night Stuart and I went to see Peter Shaffer's play Lettice and Lovage at the Menier Chocolate Factor in London's rather unglitzy 'London Bridge Quarter'.

Synopsis: Amusing rather than funny.

Directed by Trevor Nunn and starring Felicity Kendal and Maureen Lipman the play is about a stately home tourist guide (Kendal) who makes up exaggerated and oft outlandish stories to make her tours less boring. This is by far the best it on the play. She then is hauled in front of her boss (Lipman) who despite firing her also feels some sympathy for her. They develop a friendship, which is sweet if rather improbable.

The play is in three acts and although at times drole the piece ends up being a rather thinly veiled attack on post-war Britain including English modern architecture, (Shell House comes in for some particularly vicious stick). They even propose a tour of the "fifty ugliest new buildings in London".

We saw it in previews and to be honest although great actors both Ms Kendal and Ms Lipman seemed rather under rehearsed. More than once, they fluffed their lines and did not always know where to stand.

Originally, the play was written for Maggie Smith. I bet she did it better.

The show did not start until 8pm (why?) and finished closer to 11pm, which on a school night lead some of the audience to head for the door for their last train.

Recommended only if you really, really like Felicity Kendal and Maureen Lipman.