The Resistible Rise of Arturo Ui... 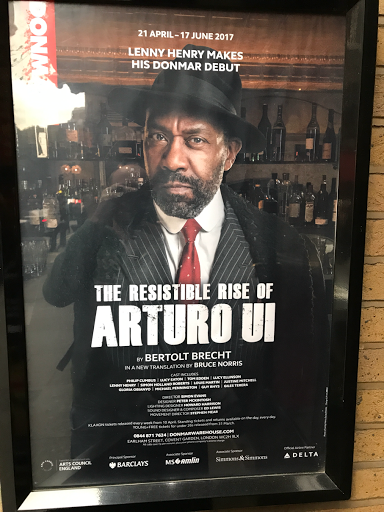 Last Friday night Stuart and I went to see Brecht's classic political satire The Resistible Rise of Arturo Ui at the Donmar Warehouse.

Starring Lenny Henry and me (more of that later!) Brecht's classic, Chicago-set satire on Hitler's ascent to power almost feels too obvious to stage in 2017, the year a right-wing demagogue took control of the United States. Employing Mr Henry as Arturo Ui was then perhaps a genius bit of counter-casting as he bears very, very little resemblance to Trump.

That said, the fact this new version is by waspish American satirist Bruce Norris would suggest there would be parallels there – plus plenty for Henry to get his comic teeth into.

Before we had even taken my seats at the Donmar, we had spoken to two actors and shaken a few hands. It was all part of the Donmar's transformation. The stalls - stage and seating - had been removed and replaced to create a space decked out as a late night jazz cafe complete with wooden tables and chairs to fit the new setting of prohibition era Chicago.

The cast mingled with the audience as they arrived in the building and then in the theatre chatting as if you are cafe customers. The reason behind some of the conversations only becomes apparent as the play properly started. If you are sat at the front, you may be roped in. As I was in the second half.

In Norris' adaptation, our Brechtian villain is a gangster who wants respect as well as power and will be as ruthless as he needs to be to get there. The fact that his protection racket targets grocers and in particular, the cauliflower importers and sellers gives you a taste of the rather bizarre tone of the piece. Who knew cauliflowers could be such a ripe target for gangsters?

It is an Arturo Ui which is frothy and fun, with unsubtle references to Donald Trump and blatant parallels with the likes of Richard III - Norris also manages to weave in excerpts from several other Shakespeare plays including 'To be or not to be'. There are also tantalising snatches of popular songs sung live in a lounge jazz style, it becomes a game of name that tune - try and guess the song from a verse or two of familiar lyrics sung in an unfamiliar way. Nat King Cole's Nature Boy gets its second stage outing in as many years too (it was the song playing at the start of Benedict Cumberbatch's Hamlet). And did we heard Bonnie Tyler's Holding Out For A Hero?

The second half doesn't feel as quite as riotous as the first and in embellishing the play this way the more serious plot development scenes can feel a little stodgy and subdued in comparison. It certainly isn't a production of nuances so one wonders if it they could be trimmed to leave more room for the fun stuff.

And so it was that I got called up on stage. I was asked to play a man on trial - falsely accused of course. For 20 minutes; I nodded, I ran around, I sat in chairs, I got cross-examined, I pointed to the guilty party, I got dressed in bandages, I got in a wheelchair, I got shot. The end.

(Weirdly out in the West End on Sunday night - two days later - someone in the street recognised me and said "I saw you on stage at the Donmar last Friday!" Fame at last!)

Anyway, enough of my fame… back to the play...

Lenny Henry's Arturo is less menacing, more of a lovable rogue who happens to have people killed and that pretty much sums this up. It is a production weighted more towards silliness than biting satire but that isn't a criticism because it was laugh out loud funny.

Recommenced.
Posted by overyourhead at Tuesday, May 02, 2017