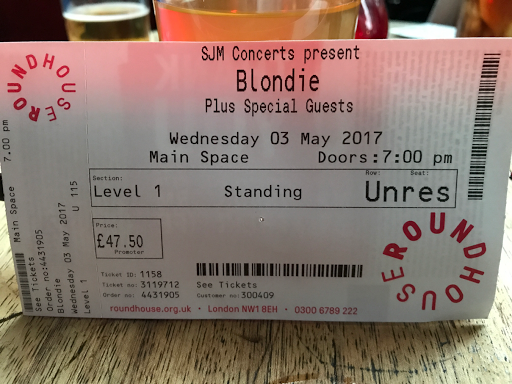 Last night Stuart, Simon, Joanna and I went to see the magnificent X Offenders Blondie perform at the Camden Roundhouse in London's not too glitzy Chalk Farm.

Ostensibly to launch their new studio album, Pollinator, and thirty-nine years after the band played a career-defining gig there the legendary rockers lit up the Roundhouse with an up-tempo set of hits old and new. In fact the new stuff sounds so much like the old stuff (a good thing) it was sometimes hard to tell them apart. Stuart and I were singing along to some of new tracks with lyrics to the old ones - the way you do. Oh, how we laughed.

The visuals were great, Debbie Harry looked amazing and was in fine voice. She chatted and joked with the crowd and worked us all up into a frenzy.

Their new single, My Monster, written by The Smiths’ former guitarist Johnny Marr wasn't the best but we danced around anyway.