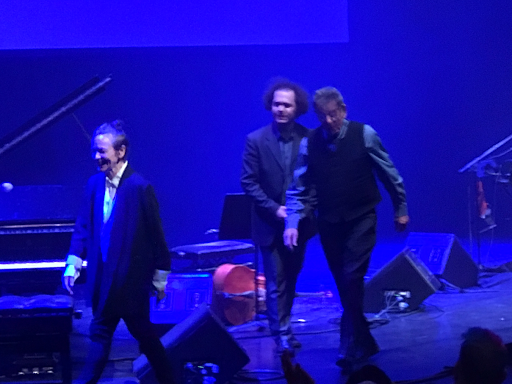 Last night Stuart and I spent an evening in the company of Philip Glass and Laurie Anderson in the Barbican Hall in London's brutalist Barbican Centre.

Philip Glass and Laurie Anderson might have known each other for forty years but the 100 minutes on stage together barely scratched the surface of what either of them have achieved either separately or together in that time.

Part improv, part jamming session, part greatest hits Ms Anderson and Mr Glass each treated us to some of their solo work while the other played along. It sometimes worked and it sometimes didn't. The playing of the instruments all too often drowned out the speaking.

The stage was set up with a piano for Glass, a desk with laptop and electric violin for Anderson’s music, and a comfortable fireside chair for her story telling. The backdrop was a large screen on which were projected images – photographs by Anderson that had been manipulated in various ways and bringing attention to the many facets of Anderson’s creativity.

Anderson, one of the most creative and influential artists of her generation has collaborated with the Kronos Quartet, John Cage, Peter Gabriel from the world of music and with writers such as Allen Ginsberg and Lou Reed to whom she was married. It was works by these last two writers that formed the basis for the performance.

The voices of both writers were present as recordings of them reading their works were played. Wichita Vortex features the voice of Allen Ginsberg reading his anti-war poem and Junior Dad is a song from the rock opera Lulu created by Lou Reed in 2011. Anderson accompanied the songs on an electric violin that could be manipulated into different sound effects by way of laptop wizardry, while Glass performed the piece at the piano. Voices from the past formed a theme to the evening’s pieces, the performance beginning with a very personal piece by Anderson "I’m Standing in a Room" recalling the loss of her mother. Anderson is one of the best story tellers around. Her timing is superb and her voice, though often pitched at a monotone is amazingly expressive. It was like she’s speaking to each member of the audience personally, almost in a whisper. Her juxtaposition of unexpected ideas is nothing short of miraculous. Anderson’s poem "World Without End" had lines that stop you in your tracks and ponder that big things in life – “When my father died it was like a whole library had burned down.” It was just a shame the sound production on the night was sub par.

To be honest, big fan though I am of both, I think I prefer them performing separately. That way they get the sound right.