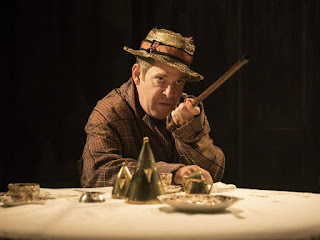 In Woody Allen's film Stardust Memories the Martians come down to Earth and say to Woody, "we enjoy your works, particularly the early, funny ones”. Well dear reader, the play Travesties is one of Stoppard's early, funny ones.

Travesties is a genuine celebration of the highly improbable but 100% true moment in European history, when James Joyce (Peter McDonald) was writing Ulysses, Lenin (Forbes Masson) was plotting a Soviet revolution and Tristan Tzara (Freddie Fox) was forming the pre-Surrealist Dada movement all in Zurich in 1917. It’s also a massive, joyous piss-take of it all, with a storyline that involves fashion-obsessed British consular official Henry Carr (Tom Hollander) being flattered by the dour Joyce to star in his production of The Importance of Being Earnest, while also posing as Dadaist poet Tzara’s brother in order to win the affections of Cecily (Clare Foster), a librarian with Marxist sympathies.

From these raw materials Stoppard creates an intricate fretwork of political and philosophical exchanges, jokes so densely packed that when you laugh at one you miss the next three, stylistic fireworks and general high jinks involving an Englishman, an Irishman, a Russian and a Romanian.

It’s all intentionally ludicrously complicated, and flies through a wild host of styles – some sections are in stilted rhyming verse; there is singing; there is dancing; there is an entire scene in the limerick form; there is much in Russian; there are allusions, word-play and parodies; there are bits surprising reminiscent of Monty Python's Flying Circus and Vic & Bob.

Not only this but Stoppard throws in a running debate about the value and purpose of art before morphing his characters into the cast of The Importance of Being Earnest in earnest. James Joyce as Lady Bracknell is a scream.

“to be an artist at all is like living in Switzerland during a world war. To be an artist in Zurich in 1917, implies a degree of self-absorption that would have glazed over the eyes of Narcissus”

In lesser hands, such overload could be insufferable. With this gang, displaying the finesse of accomplished farceurs on Tim Hatley’s paper-strewn period set, the artifice is fleet, funny and hooks you in even as you pant to keep up.

It’s impossible to do full justice to the cast but Tom Hollander is outstanding as dotty Henry Carr, Freddie Fox shines as the insolent Tzara, Peter McDonald is spot-on as an ineptly dressed Joyce (even magicking a rabbit from his hat), and the sung-through showdown between Clare Foster’s Cecily and Amy Morgan’s Gwendolen, a barbed conversational exchange familiar to Wilde lovers but here reprised as if in some demented dream, is alone worth a wait in the returns queue.

If you only know Stoppard from stuff like Arcadia or Shakespeare in Love, you might be taken aback by the wildness, no the Wildeness, of Travesties.

Thank goodness a West End transfer is on the cards – anything less would have been a travesty.