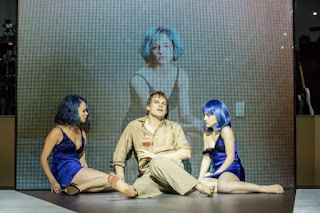 A wealthy recluse - Thomas Jerome Newton - the stranded alien protagonist of the 1976 film "The Man Who Fell to Earth" is dying but somehow not dead, and sits atop his New York tower, hallucinating about his past and the music of David Bowie.

For the original Bowie songs - Changes, Absolute Beginners, Sound and Vision, Heroes etc. - are great. And the actors including the wonderful Michael C Hall, the co-writer Enda Walsh and the director Ivo van Hove - are all very talented too. So where does it all go wrong here?

Well, let's start with the show-tunes versions of the classics. This is a big misstep. Not that we have a jazz hands version of The Man Who Sold the World exactly - but almost! And giving it loads of shoulder as you croon a slowed down Changes doesn't make it any more meaningful even if you did have mousy hair - which you don't. And we collectively cringed at a spoken-word over-enunciated Life On Mars? that would even make Eliza Doolittle blush. And don't get me started on the staccato Heroes - it was done way better in Moulin Rouge!

The back projection was excellent and band played very well. And if we had come to see a Bowie tribute gig I perhaps could have been more forgiving. But we hadn't. We'd come to see a a drama with music, paid through the nose and frankly felt ripped off.

I know Bowie was involved with the original production but this was just bewildering and frustrating. And at times just plain silly. Slide around the stage in a pool of milk anyone?

Hard to recommend. There were lots of yawns near us.
Posted by overyourhead at Tuesday, November 22, 2016