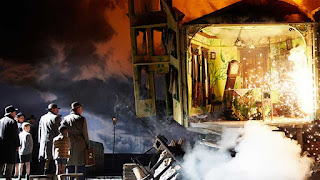 Last Friday night Stuart and I went to see An Inspector Calls at the Playhouse Theatre in London's glitzy West End.

(Full disclosure: I've shagged the director so the following views may be well biased, innit.)

J B Priestley's An Inspector Calls is a thinly-veiled attack on the Upper Classes. So thin in fact that at one point one of the characters breaks the fourth wall to step forward, wag his finger and lecture the audience on the injustices metered out by the privileged few and reiterating the wrongs that we have just witnessed. And it's a bit of a toe-curling moment.

But that aside it's a merry old romp. Hidden inside what appears to be a Wendy House at the back of the stage a posh family are having a celebratory engagement dinner. However, when a mysterious visitor comes a-knocking asking questions each nob in turn let's slip a secret about how they have done someone less well-heeled than themselves a grave misdeed. Giving them each enough rope to hang themselves (and their class) the Inspector gets the toffs to see the error of their ways. Or does he?

It's a fun show with lots of dramatic music, rain, smoke, and a fabulous lurching set. And of course a solid message.

The stylised tone straying perhaps a little too far into melodrama at times but well worth a night out. Shag or no shag.

Posted by overyourhead at Wednesday, November 30, 2016