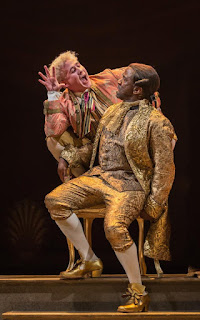 On Friday night Stuart and I went to see Amadeus at the Olivier Theatre on London's glitzy South Bank.

Synopsis: Great revival of a great play. It's annoying Mozart vs mediocre Salieri - with the questionable message that envy is sorely an affliction of the second-rate.

Thirty-seven years after its highly acclaimed and celebrated premiere, Peter Shaffer’s Amadeus has returned to the Olivier stage in a bold, boisterous, and masterful production. Michael Longhurst, who directed Nick Payne’s Constellations, colours Shaffer’s epic tale with both pomp and irreverence: the world of Mozart moves effortlessly from the vulgar to the sublime. With the Southbank Sinfonia beautifully accompanying throughout, Amadeus is high drama and symphonic storytelling done at its best. The icing on the cake is the excerpts of Mozart’s masterpieces presented in gorgeous splendour including snippets of The Magic Flute, The Marriage of Figaro, and Don Giovanni.

Lucian Msamati from this year’s Ma Rainey’s Black Bottom leads as Antonio Salieri - the “patron saint of mediocrities”. Msamati is a stoic, calculated power, who only cracks when listening to Mozart’s music, turning tender and vulnerable. Adam Gillen as Mozart on the other hand is perfectly haughty, infantile, and erratic. He stamps about with a rebellious attitude, but also displays a dependence on others that not only evokes pity but compassion. Both are opposite yet equally astonishing performances that complement and, just as with their characters themselves, almost rely on each other.

History, legend, scandal, and music make up the components of Shaffer’s prodigious script. As upstart young talent Wolfgang Amadeus Mozart galvanises Vienna with his remarkable music, established composer Antonio Salieri is consumed by jealousy. It is a searing meditation on genius, rivalry, and what it means to be immortal.

The play starts as, disregarding the fourth wall, Salieri tells us about his career, a success story tainted only by the fact that he is acutely aware of his own meagre talents, and acutely aware of young Mozart’s genius. He wants to kill him.

Adam Gillen’s white-hot Mozart is almost too much at first, seemingly channelling The Young Ones as he farts and froths and shrieks across the stage. On one level it is virtuosic – here is the simpering, giggling, infantile enfant terrible who is so busy casually showing off, he fails to notice how many of the stuffy courtiers standing around him are being permanently alienated. Gillen, with a shock of bright blonde hair, and a baby-voice that would make the most tolerant type want to throttle him, pushes Mozart’s insouciance so far that he’s often loping about the place with a Quasimodo-like gait

Good though Gillen is there is surely a limit to how much an audience can take however. As he renders every last syllable and spits it through a mangle so piercingly boorish that by the end you would be forgiven for thinking Salieri more a fumigator than an avenger. I realise we are seeing Mozart through Salieri’s memory, not the real Mozart, but that doesn’t make it any less agonising to share a theatre with.

A master stroke of the production is to make the Southbank Sinfonia actually part of the action. They don't only play Mozart, they act with Mozart too. Although at times this creates certain undeniable problems: a chorus engaged in a 21st century rave to a remixed Symphony No.25 runs perilously close to adding little while trying too hard. But at other times it reaps scintillating rewards: at the play’s turning point the entire set seems to advance towards the audience on a prostrate Salieri as the Mass in C minor rises in crescendo, one of the finest unities of sound, visuals and plotting I have ever seen done at the National.

All in all, it was a wonderful evening with glorious performances with my only slight niggle being Wolfgang Amadeus Mozart himself. Jess, what a smug twat!

Posted by overyourhead at Monday, November 07, 2016