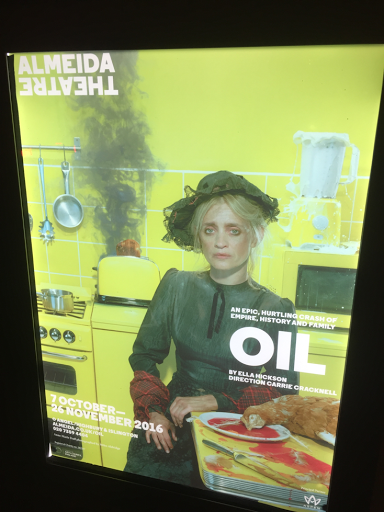 .
Last Thursday Stuart and I went to see mini-epic Oil at the Almeida theatre in London's glitzy Islington. Starring Anne-Marie Duff as the central and recurring character May, the story unfolds as a history of oil and energy as told in five different sub-sections. Each sub-section is effectively a whole play in itself set at different periods in history and often in different countries. The five sub-sections run sequentially. And we have to make sense if them.

We start off in the 1860s on a meagre candlelit farmhouse as a stranger arrives with a wondrous new kerosene lamp. We then get transported to Iran in the 1930s (oil discovery), the UK in the 1970s (oil crisis), Iraq in the near future (oil war), and UK in the distant future (energy crisis).

Rather like in Cloud Atlas the same characters and actors constantly reappear and common threads weave into each tale. A mother, a daughter, ambition, love and abandonment... And oil of course. Although oil is very much the medium rather than the message. These dramas are all very human. It just so happens that these particular humans work in, or are affected by, the industry we call oil.

It was a brave attempt at a play - our series of plays - with many interesting ideas. But it was equally frustrating and some of the sub-sections were decidedly weaker than others and perhaps could have done with some rewrites.

Ms Duff was excellent thoughout though.

Posted by overyourhead at Friday, November 04, 2016