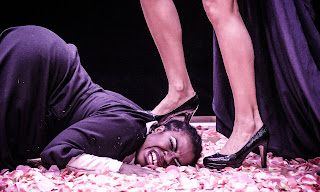 Last night Stuart and I went to see The Maids at the Trafalgar Studios in London's glitzy West End.

Written by Jean Genet in 1947 the play, based on a true story, is a sexy, violent, profanity-ladened study of power, race and servitude. Two black maids (French, sisters and maybe lovers) play S&M games acting out the killing of their white mistress. The twist is that the maids not only want to kill their mistress, but also wish they could be her.

The play opens with them fantasising about doing both – a sort of play within the play. Claire, dressed as Mistress, is ordering Solange around. Solange, dressed as a maid, resists and insults her, then pretends to strangle her. They repeat this charade whenever the Mistress is away and the line between fantasy and reality blurring more and more each time.

When the Mistress does return she belittles them and denigrates them only inspiring the maids' hatred and love/hate fantasies all the more. It's a complicated, highly dysfunctional and toxic relationship. But how will it end?

Superstar director Jamie Lloyd has brought together a superb all-female cast of Uzo Aduba (yes, her off of Netflix’s Orange Is the New Black), Zawe Ashton (yes, her off of Channel 4’s Fresh Meat) and Laura Carmichael (yes, her off of ITV’s Downton Abbey). Lloyd's direction is excellent as ever with jolting lighting changes and energised sound-cues. Threatening dance music pounds away at times, summoning a mood of enveloping menace.

But the night goes to the three female stars who are all simply transfixing. They spar, they lunge, they attack, they spit, they swear, they act their beautiful socks off.

OK, perhaps we could have done with an interval - two solid hours on the Trafalgar Studios's seats would test the hardest of bums - but it was two hours very well spent.