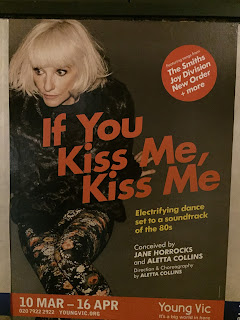 Last night Stuart and I went to see Jane Horrocks' theatre show If You Kiss Me, Kiss Me at the Young Vic in London's glitzy Waterloo.

It was a night where Ms Horrocks puts her own twist on the New Wave sounds she grew up with in the Northwest. And God I so wanted to like this show.

So what was it? Well, it was a hybrid show - part gig, part dance piece, part theatrical mash-up - which was performed on stage by not only the lovely Jane but also a four-piece band and four jerkily energetic dancers.

As I've hinted, the show didn't really work. It fell between the three wobbly stools of being a rather insipid gig, unremarkable dance show and banal theatrical piece. Also fundamentally the thirteen or so song choices were just too obscure to be recognised by a modern diverse audience. A track-listing better suited for a Duckie night or a Retro Bar Pop Quiz perhaps? That said many of the (re)interpretations were wonderful (more on that later).

Ms Horrocks was strangely distant as a stage performer and there was virtually no audience engagement which was a real shame. The few bum notes we suffered would have been easily forgiven if she had remained true to her Debbie Harry / rock-chick platinum blonde look and aimed to get everyone on their feet in a rabble-rousing performance. But no, she just sang, shuffling around the stage a bit much as we just sat there, shuffling in our seats a bit. We even felt cheated out of being able to applaud the end of any given song as she would quickly start another. Doesn't Gig 101 teach you the rhythm is pause-applause, pause-applause, pause-applause?

The setlist was:-
Anthrax by Gang Of Four
Atrocity Exhibition and Isolation by Joy Division
Fiction Romance and What Do I Get? by Buzzcocks
Nag Nag Nag by Cabaret Voltaire
Empire State Human by The Human League
Hot On The Heels Of Love by Throbbing Gristle
My New House by Fall
Memorabilia by Soft Cell
I Know It’s Over by The Smiths
Temptation by New Order
Life Is A Pigsty by Morrissey

The three stand-out performances for me were the slowed down What Do I Get?, the epic Empire State Human and the manic Memorabilia which were worth the ticket price alone. Perhaps the reason I liked these particular performances so much though was because I liked these three particular songs so much. Which is a sad indictment on a night that had a great idea at its heart but you only liked the songs you knew. What it needed was sharper song choices (or the personal reasons behind why those thirteen were chosen) and a more personably singer to sing them.

Sorry Bubble, just an E for Effort.
Posted by overyourhead at Friday, March 18, 2016