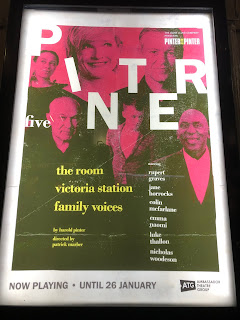 Last night Stuart and I went to see a brilliant trio of Harold Pinter one act plays at the Harold Pinter Theatre in London's glitzy West End.

Billed as part of the Pinter at the Pinter season, this night was called "Pinter Five" being the fifth collection. Superbly by Pinter’s colleague and friend, Patrick Marber, it was stylish triple-bill by the great man.

The night started with Harold Pinter’s first play, The Room (1957) - a hauntingly otherworldly, yet an all-too-familiar piece. Topical English xenophobia runs throughout as things take a darkly funny turn. An unexpectedly odd and frighteningly play.

In the hilarious yet unsettling Victoria Station with its dark humour and the reflective Family Voices, isolated voices attempt to communicate, but can we ever truly express the depths of our feeling?

Special mention needs to be made of Luke Thallon who plays a multitude of characters in Family Voices - male and female, young and old - to great comic affect.
Posted by overyourhead at Friday, January 25, 2019