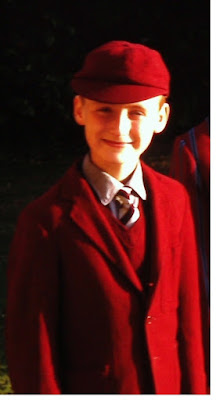 When I was at school, I was bullied. A common enough experience in many people's pasts I think. However, whereas some people can perhaps try to put such things behind them, for me the memory has not exactly been allowed to fade. You see, I see my tormentor almost every day.

It was in the early 1970s when the bullying started. I was at a boys' school and my particular tormentor would see fit to embarrass me in front of my classmates. He would do it in front of the teachers too - who, quite cruelly to my mind, would often join in the laughter. He would mimic my walk, mimic my speech, and shout personal insults out in a packed classroom. I would go bright red or hang my head in shame. A room full of jeering boys is a fate worse than death - or so I thought. I don't think it was homophobic bullying per se - but just him picking on someone who he though was vulnerable, who 'deserved it'. Someone who was weaker than he was. He would play to the crowd too. Entertaining the group. I burn with anger as I can still hear the laughter ringing in my ears today. The teachers rarely intervened just assuming it was part of the toughening up process - the little chicks sorting out their pecking order in the barnyard - boys learning how to be men.

Nevertheless, I found it humiliating. Humiliating and distressing. I was only 11 years old, rather sensitive, and couldn't cope with the corrosive fear of what my tormentor might do next. After a few weeks of the bullying, I wanted to avoid going to school altogether. So I would leave classes early or bunk off some days completely. I didn't feel brave enough to tell my parents what was going on at the time. I was too ashamed. Too frightened.

Over time, I learned to live with it I suppose. I tried to 'man up'. I decided I was going to try to ignore it and returned to class. But the insults just kept coming and eventually my distress turned into anger and I was left with a burning hatred of my tormentor. I vowed to get revenge. I didn't know how, but someday I would get my own back. His name was to be forever carved into my brain. I hated him. I still do. And although that was 46 years ago, I still feel the shame and the anger at him as if it was yesterday.

And the worst thing about it since? I have not been allowed to forget him. You see, even though the decades have passed, this person's name has cropped up repeatedly - in the media, in the papers, online. Because he is an actor. And quite a well-known one at that. He has gone on to carve out himself quite a successful career - mainly playing (you've guessed it) baddies. He has been in many popular TV shows - comedies, musicals, and dramas - the go-to guy for his evil laugh. Apart from TV he has also appeared in many films, some video games, and on the West End stage. He is, I hate to admit, quite famous. The torture in my mind continues.

And although I try to avoid learning anything about him because of the painful memories it brings back, this week I stumbled quite by accident across a stark reminder. I had opened the evening paper and started to read something that caught my eye. It was an article about a person who had also been bullied. Bullied by their neighbour. And it had left that person depressed, paranoid, and frightened to leave their upstairs flat. Apparently, the downstairs neighbour had taken against their victim, initially about the noise being made, but things had soon turned nasty and the neighbour had started calling this person names - shouting through the letterbox, abusing them in the hallway and in the street. Eventually the victim had had to move out of their shared building entirely and sell up, at a loss. The article in the paper was about the court case that had followed. The victim had taken the abusive, bullying neighbour to court and successfully won almost £100,000 in damages for emotional distress caused by the bullying.

And yes, you have guessed it. The winner of the bullying claim, the victim who had had to leave their home was my very own schoolyard bully. My tormentor. The tables had turned. The bully had become the bullied.

As you can imagine I had very mixed emotions when I finished reading the article. Yes, I felt sorry for him - for the first time - as I know only too well how awful being bullied can be. But then I thought, with a slight twinge of guilt, "Good! Now you see what it is like! Take that, you little evil fucker!" I hoped his charmed life had taken a good kicking. I also couldn't help but wonder if he'll give any of the cash he won to any anti-bullying charities? I doubt it.

So justice (of sorts.) But although I realise there are no winners here, it has given me some sort of closure. Call it schadenfreude but I feel that this particular barnyard pecking battle has now been settled in slightly different order than it was 46 years ago. This particular chicken has at last indeed come home to roost.
Posted by overyourhead at Wednesday, January 23, 2019