Amane presents: The Spirit Of Eno "By the end of the night Paul and I were both in tears. Tears of joy" @amanesuganami @CamdenAssembly ... 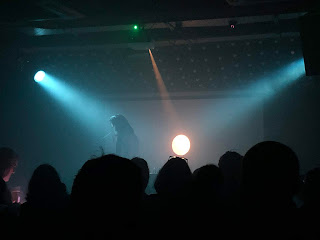 Billed as "Amane presents: The Spirit Of Eno" it was a very special night. It was a celebration of some of Eno’s greatest works from across his 45-year career. Eskewed work with David Bowie, David Byrne, Talking Heads, U2 and Coldplay last night Amane concentrated on Eno's ambient work.

It’s no exaggeration to say that the genre of ambient music wouldn’t exist without the work of Brian Eno, not least because he coined the name for the genre himself!

Amane reinterpreted selected tracks from Ambient 1, 2 3 and 4, Films, and Apollo, all records that are rightfully regarded as genre classics, and stand as some of the electronic icon’s most timeless pieces of music. 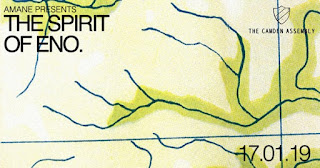 Highlight was Sparrowfall from Music for Films. A masterful, haunting, hypnotic night.

By the end of the night Paul and I were both in tears. Tears of joy.
Posted by overyourhead at Friday, January 18, 2019