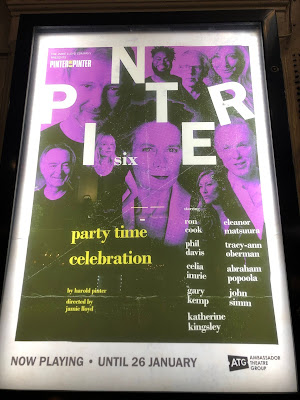 Last Friday night Stuart and I went to see a brilliant duo of Harold Pinter plays at the Harold Pinter Theatre in London's glitzy West End.

Billed as part of the Pinter at the Pinter season, this night was called "Pinter Six" being the sixth collection. Superbly directed by Jamie Lloyd, it was stylish double bill of party-set comedies by the great man.

The night started with 1991's Party Time - a scathing, bitter and very funny attack on the increasingly powerful and narcissistic super-rich, all dressed in black, set against the backdrop of terrifying state oppression. It was set at a swanky soiree, at which John Simm’s obsequious Terry is trying to sell Phil Davis’s prim official Gavin on the merits of his fancy members’ club. But other things are trying to intrude: Terry’s wife, Dusty (Eleanor Matsuura), keeps asking as to the whereabouts of her brother, Jimmy, despite Terry’s venomous attempts to get her to shut up. And there are allusions to violence and protests on the roads. Meanwhile, the double doors at the heart of Soutra Gilmour’s set are sporadically hammered upon, a dazzling light shining between the cracks. It is a hilarious, unnerving evocation of the bubble of extreme privilege at the top of a dictatorship. Celia Imrie almost steals the night with her dry put-downs of her dear but departed friends. Cruel but clever.

The second play, Celebration, written in 2000, is an irresistible comedy about the vulgarity and ostentatious materialism of the nouveau riche, set in a fashionable London restaurant. Our cast to die, now clad in cheap suits and covered in bling, for are all scoffing at a fancy restaurant after a night of culture they failed to understand and can barely remember. They are all full-on old school Eastenders intellectually outclassed by the staff who wait on them. It is an evening of social satire that chimes with our times.

The high point comes when the raucous boozing is broken up by the interjections of Abraham Popoola’s waiter, who butts in to inform the bemused carousers of his grandfather’s friendship with various titans of the literary world.

A top night out. We laughed and laughed. This Pinter season has really hit its stride. Roll on Pinter Seven!
Posted by overyourhead at Monday, January 14, 2019