Quiz Night @HighburyL Great fun. How did we do? We came fourth! And can you guess which famous album cover we recreated in Playdoh? #QuizTeam #SnickersInATwix #PubQuiz 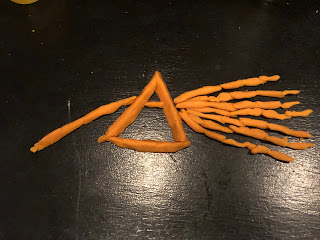 We changed our team name once again - this time to Don't Get Your Snickers In A Twist.

Liz was calling out the questions, Andrew back spinning the tunes, and Ryan pulling the pints. It was great fun.

As with last time, there were loads of inventive rounds involving eating, making stuff and guessing the intro. We downed quite a few beers and the odd bottle of wine, ordered some super-tasty Tangy food (that didn't really do us any favours in the taste round) and had a rare old time.

Oh, and what is the weird picture to the left? There was a Playdoh round. Can you guess which album cover we recreated?


In the News
1. Who caused controversy by getting let off a speeding ticket Scott free?
2. Google celebrated a birthday last week, how old did it/he/she turn?
3. What did Thomas Bjorn, captain of team Europe, winners of the Ryder Cup, promise he would do before the tournament if they were to be victorious?
4. Who scored 147 runs at the Oval during his last test match in an England strip?
5. A seal jumped out of the sea in New Zealand and violently slapped a man with a what?

World
1. Which English county is referred to as "The Royal County"?
2. Which Mediterranean island takes its name from the Classical Latin translation of "larger island'?
3. What name did the Romans use to refer to the land north of Hadrian's Wall?
4. What is the name of the street in New York City synonymous with the advertising industry?
5. Who as the first African football player to play in the English Premier League when he made his debut for Coventry City in 1991?

Food and Drink
1. Which American fast food chain traditionally uses square burger patties apparently in order to show customers the quality of the meat?
2. What is Gewürztraminer?
3. "Out of the Strong Came Forth Sweetness" is the slogan which food product?
4. What liquid is added to a Martini in order to create a 'Dirty Martini'?
5. Which fish is the national dish of Barbados?

Connections -
1. On the London transport network, which word precedes Hill and Gateway for the names of 2 separate stations that are linked by a walkway?
2. What was the name of George Clinton's Funk band that later formed a collective with Funkadelic?
3. What was the setting for Britney Spears debut music video - Hit Me Baby One More Time back in 1998?
4. Which British force uses the slogan "Be The Best" in its recruitment drive?
5. In the California penal code, what crime does Section 1-8-7 refer to?

What is the Connection?

Science & Nature
1. In which year did Apple release the first iPod?
2. What is the name of the electronic musical instrument controlled without physical contact from the performer?
3. What unit of power is defined as moving 550 pounds by 1 foot in 1 second?
4. Born in 1865, and originally seen as the heir to Sigmund Freud, who was the founder of analytical psychology?
5. What behaviour gives the black widow spider its name?

The Arts and Culture
1. Which artist used the following quote for their book cover "There's no way you're going to get a quote from us to use on your book cover" by Metropolitan Police Spokesperson"
2. Which musical film features the pupils of Rydell High?
3. Who wrote the 1949 feminist book "The Second Sex"?
4. Which Coen Brothers movie features the character Jesus Quintana?
5. The artwork for the 1979 London Calling album by The Clash is a cultural reference to the debut album by which recording artist?

Extra point for spotting the connection?

Posted by overyourhead at Wednesday, October 03, 2018