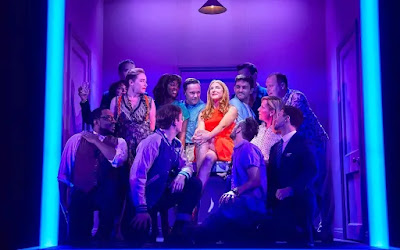 We were hoping that these ridiculous number of five stars reviews were justified. They were. It was a fabulous production of a fabulous show. The songs were memorable, the story funny, the acting spot-on, the band gorgeous, the set magnificent, the direction perfect, and the singing sublime.

Premiering in 1970 as a musical about contemporary attitudes to sexuality and relationship status, it ruffled feathers back then, won awards and revealed that musicals could be serious as well as filled with pizzazz. Marianne Elliott’s new production reverses most gender roles, giving a powerful and fizzy look at a single urban woman’s life as she hits 35, pulling no punches as the show looks at marriage, choices, friendship, and whether or not all candles need to be blown out on a cake for a wish to be counted. It fits so neatly and so vibrantly that it instantly feels like this is what Company could have been all along, we just missed that one little element. Yes, ladies and gentlemen, they have successfully Gielgud-ed the lily.

Changing the roles means more than just changing names and costumes. Stephen Sondheim has reworked some lyrics and songs for the production – altering attitudes, emphases and wording to reflect the new focus of the show. It still follows the main character through a series of illustrative vignettes on the day of their 35th birthday – a collection of thoughts and scenes describing an emotional, rather than narrative, arc. Witnessing the various positive and negative states of her friends’ marriages and divorces, Bobbie reflects on her own situation with the boys she goes out with, reflecting (perhaps discovering) her own true wants and needs.

As Bobbie, Rosalie Craig is a whizz. Beautiful vocals, charisma to spare and comic ability to break a full auditorium with little more than an eyebrow raise. It is just a mature, engaging, memorable and enjoyable performance, simple as that. Craig’s singing is top notch and would steal the show in most other productions in town. Sadly, for her, alongside the great Patti Lupone and the rest of a superbly capable cast she will have to be happy as just one of many fine singers. Each number is delivered with creativity in the music, choreography (Liam Steel) and staging, with the genuine highlight being the level of sass the three boys (Matthew Seadon-Young as Theo, Richard Fleeshman as Andy, and George Blagden as PJ) manage when performing the cracking You Could Drive a Person Crazy. It would be easy to detail the individual achievements of each cast member, but there is a word limit and really all that needs to be said is that every one of them comfortable shares a stage with Patti Lupone and Rosalie without a single dud in the pack.

That said, and I know we should not have favourites, but Jonathan Bailey and Alex Gaumond's turn as a same-sex couple hesitating over marriage, is simply show stealing. As Bailey said, "You literally do not have to change a word and suddenly you have a really honest, searing presentation of a man who is treading water between queer culture and the heteronormative ideal of marriage. That contradiction and debate is so relevant right now." And it is very, very funny to boot.

Supported by a very clean set design from Bunny Christie and an excellent musical backing throughout, this is a musical that feels brand new. The update to the lyrics feel natural, the characters are well written (though some, like Andy the air steward a little superficial) and the comedy sharp.

In 1970 Bobby the bachelor was the right choice for Company. It is a great part, super character and is a fantastic vessel for a story about marriage and relationships in a world where the old structure of these things was changing. Now though, Bobbie fits perfectly. It’s a modern musical for a modern audience – intelligent and fun. This feels exactly like how a new production of a classic should be done. Five stars!

Posted by overyourhead at Monday, October 29, 2018