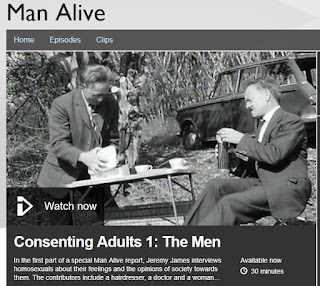 Below is a link to a very moving, quite revealing, occasionally heartbreaking (and often funny) BBC documentary from 1967. Jeremy Vines interviews homosexuals (the term 'gay' hadn't been coined then). The main themes seems to be sex, companionship and looking for love. Universal themes in life I think.

"In the first part of a special Man Alive report, Jeremy James interviews homosexuals about their feelings and the opinions of society towards them. The contributors include a hairdresser, a doctor and a woman whose husband committed suicide rather than face a court case that would have revealed his sexuality. The language used in the programme is often blunt and reflects the attitudes of the time. (1967)"

Some great quotes though:

"Most homosexuals dread getting old."

"You either hang around toilets or you go to London!"

This first documentary is just about men. The sister show afterwards is about women "Man Alive: Consenting Adults 2: The Women." One of the women (Stevie) in the second part seems to be more trans than lesbian, the lesbian couple are lovely, and the married lesbian at the end does seem genuinely torn between her family and her girlfriend.

Both shows are well worth a watch.