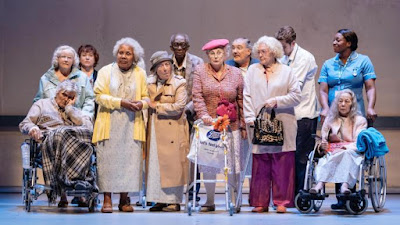 Short review: Alan Bennet has done it again. Another laugh out loud funny play in which he once again trains a sharp eye to delineate Englishness.

Longer review: In Bennett's first new play in nearly six years he paints an affectionate portrayal of the National Health Service despite its depiction of a hospital in crisis. The play is packed with well-crafted jokes, often involving Yorkshire towns, but has a central theme that affects the whole of the UK. Behind the laughter is a strong point to be made about universal health care. Keep your stinking hands off our NHS!

The setting is the geriatric ward of a Yorkshire hospital, the Bethlehem, that is threatened with closure. It is not, however, going down without a fight. Salter, the self-important chair of its trust, has waged a sponsored campaign to keep it alive and has a TV crew on hand to record its vitality. The patients are a cheery lot with their own choir - classic songs, arranged by George Fenton, are sung with gusto often accompanied to simple, joyful choreography from Arlene Phillips.

The hospital's attempt to survive is tied up with publicity gimmicks and the renaming of wards after celebrity stars - "can you squeeze her into Joan Collins this afternoon?" "Grab a mop, we've a clean-up to do in Fatima Whitbread."

But the arrival of Colin, a management consultant attached to the health ministry, suggests that the days of this kind of cradle-to-grave hospital are numbered. Even Sister Gilchrist has her own peculiar methods to ensure maximum cleanliness with her determination to ensure the ward has a rapid turnover.

Around this plotting circles an immigrant doctor, depending on a student visa, who is threatened with deportation and rebuked for his hands-on care.

At its most effective the play hones in on the moments of care and kindness that still manage to exist, even within a target-driven, throttled hospital system.

In a 25-strong cast there are some fine performances. Deborah Findlay as the criminally efficient Sister, Peter Forbes as the self-aggrandising Salter, Samuel Barnett as the post-Thatcherite Colin and Sacha Dhawan as the precarious immigrant all impress. Among the patients Julia Foster as an ex-librarian, Jeff Rawle as the old miner and Simon Williams as the scholarly teacher stand out.

Even if individual characterisations could perhaps do with being fleshed out a little more, overall there's something inspiringly defiant about placing centre-stage those who lurch on Zimmers, loll in wheel-chairs – too often banished from society's view.

Bennett's craft as a writer, the way he slides effortlessly from the comic group scene to the single, telling moment is always apparent. Two stunning scenes could only have been written by him. In the first, Lucille and Mavis (lovely Patricia England) reminisce about the joys and disappointments of marriage, ending with the dying fall of "still it was better than this." In the second, Joe tries to talk on the telephone to his son, who is in a box at the opera with the Health Secretary. "Does he like opera? <pause> Well, why does he go then? <pause> Pharmaceuticals? <pause> Do *they* like opera?"