Who's Afraid of Virginia Woolf?... 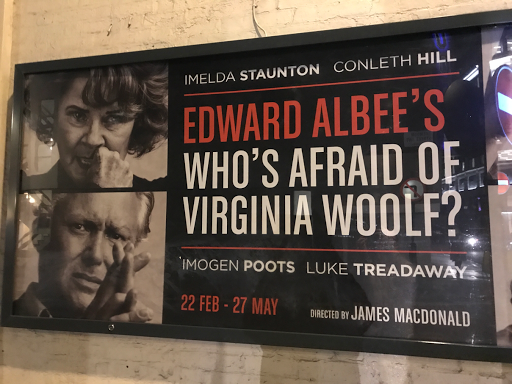 Last night Stuart and I went to see acerbic masterpiece Who's Afraid of Virginia Woolf? at the Harold Pinter Theatre in London's glitzy West End.

Who's Afraid of Virginia Woolf? is a 1962 play by Edward Albee that examines the breakdown of the marriage of a middle-aged couple, history professor George (Conleth Hill) and his wife Martha (Imelda Staunton).

In the early hours of the morning on the campus of an American college, Martha, much to her husband George’s displeasure, has invited the new professor Nick (Luke Treadaway) and his wife Honey (Imogen Poots) to their home for some after-party drinks. As the alcohol flows and dawn approaches, the young couple are drawn into George and Martha’s toxic games until the evening reaches its climax in a moment of devastating truth telling.

Martha and George's tempestuous and volatile relationship is unsettling but fascinating to watch. Their truth is cruel and vicious. It's about as far away from the American happy nuclear family as you could imagine.

Elizabeth Taylor and Richard Burton famously bought the play to the big screen in 1966. And although Taylor's Oscar winning performance initially loomed large in our thoughts last night the evening belonged to Imelda Staunton. Her Martha was almost feline as she spat out her lines. Her Martha was a cat trapped. A cat with its fur up. A cat on a hot tin Woolf.

The ghost of Taylor after all.

Posted by overyourhead at Friday, February 24, 2017