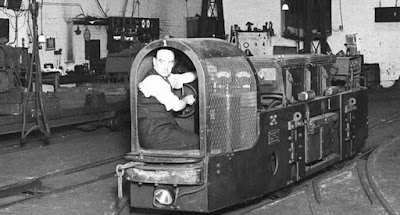 The Royal Mail's little underground line is due a new lease of life. Once it's open to visitors it will do a loop from Mount Pleasant and back for a ride of around 15 to 20 minutes. Let's hope it comes off.

The Register wrote an article about it...

For the last 13 years, a tiny train tunnel running through the centre of London has remained empty and unused, maintained by just four engineers. But these engineers don’t work for Transport for London or Network Rail – they work for the Royal Mail.

The small gauge tunnel, running for 10.46km (6.5 miles) from Paddington to Whitechapel, 70 feet (21 meters) beneath the ground is the London Post Office Railway, more commonly known as the Mail Rail. From 1927 to 2003, 50 driverless, electric trains shifted 30,000 items each day, running up to every five minutes during peak times, serving eight stations and major sorting office beneath the snarl of urban traffic overhead.

Now, it’s set to become London’s latest tourist attraction, as The Postal Museum and Mail Rail in 2017 to reopen the section that runs underneath Mount Pleasant in Farringdon. Eventually, there’ll be a new museum, café, gift shop and all the trappings, but on the day of El Reg’s visit, it’s all hard hats and high-vis vests.